I’ve been back from Greece for almost three weeks now, so I’ve had some time to process my time there and reflect on my memories. And although I've shared photos and stories with family and friends it's always hard to convey the essence of any big experience. At least for me, most of what I take away from travel is internal and expressed through my work, responding to whatever surfaces in terms of memories and thoughts. I feel that what comes forward intuitively is the true distillation of the experience as a whole. 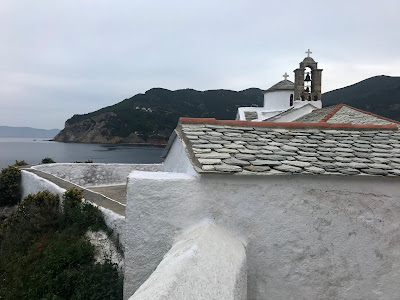 From my time on the island of Skopelos, where Jerry McLaughlin and I taught for two weeks, the strongest impact was visual—the colors of the sea under various lighting and weather conditions, the angles of the white buildings, and the patterns made by the hundreds of stair steps we climbed every day to get up to the studio and down into the village. 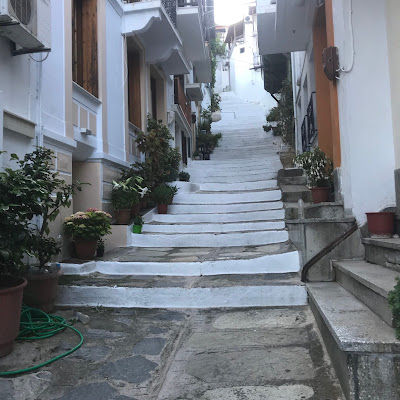 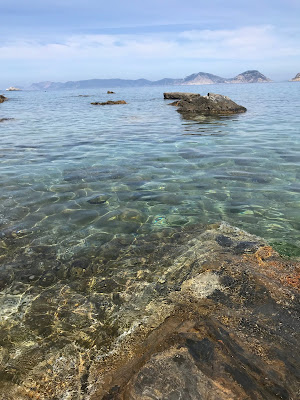 The sea colors ranged from dark and opaque at a distance to startling turquoise and aquamarine typically seen near the shore. On hazy days the horizon lined formed by sea and sky would almost disappear. It was a constant show every day—the studio we worked in had a spectacular sea view.

Blue was the dominant color in several paintings I did while teaching and has continued to play a role in the work I’ve done at home, though less prominently. White is the other dominant color in the landscape there—along with terracotta of the rooftops. The houses and other buildings are almost all white with colorful accents and set into a steep hillside along winding alleyways and narrow streets. The pattern of angles that result was always intriguing. So, these colors, shapes, and patterns have stayed with me as aspects of form. They are coming naturally into my new work and give some feeling of the atmosphere of Skopelos, but they were more pronounced in the work I did while I was on the island.


What has surprised me a bit since coming home is that the few days I spent in Athens are having the strongest impact in terms of feeding my work. I think that is because what I experienced there was as much conceptual as visual, and bring more meaning to my imagery. The sense of vast history was clear right away in the archaic remains that are still very present in the modern city. Passing by the ruins of 2500-year-old buildings while walking from my BnB to the metro was astonishing enough. But there was much more to be experienced in the incredible museums, on the Acropolis, and in the ancient cemetery of Kerameikos. I was often touched by the humanity and presence of these ancient people and by the strength of their accomplishments—not only the monumental architecture but the amazing realism of the figurative sculpture and the reliefs carved on gravestones. 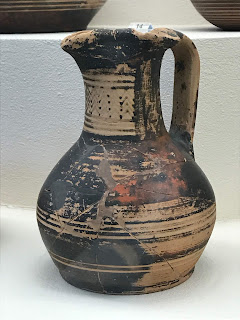 Because I was so struck by the antiquity of the city, I guess it is natural that references to artifacts and monuments, and even some vague figurative suggestions have been appearing in my work. I understand the connection but it has caused me to reexamine the usual statements I make about my work.  For years I’ve cited rugged, wild landscape as the basic source for my imagery. But in addition, in the past year, architectural references have appeared, coinciding with a new interest in shapes, angles, and contrast. And now these unexpected new ideas relating to the my experience in Athens.


Although these new ideas come from outside my typical sources, I love the freedom I'm feeling with them. I'm not questioning whether they "fit" with past work-- just working intuitively, enjoying the process and moving forward. It seems that the further I go on this art journey, the less need I have to nail it all down, to explain and justify.  While working with limited focus has been very useful to me in the past, now the possibilities are expanding.

I also find it interesting to re-read the original intentions that I set for my work years ago. They are not specific to a landscape reference--instead, they have to do with expressing power, presence, energy, a sense of the unknown, and personal connection, without mention of the source material for these ideas.  So although landscape served me well for years-- and is certainly still part of the mix--it seems very exciting to open up new pathways to those long-held intentions.

I have more paintings in process or finished done in response to my time in Greece, and I plan to exhibit them at my show at Addington Gallery in Chicago that opens July 12. I hope that any friends in the Chicago area will stop in for the opening on the 12th (I will be there) or sometime later. The exhibit continues through August 29.
¶ 1:04 PM 0 comments