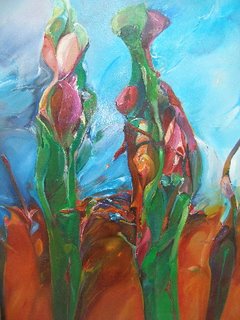 I'm planning my second annual Open Studio for June 17th (noon-6pm.) so anyone in the area who is reading this, please come! I'll be hanging both older and current work, as well as some in progress.

Last year I decided to sell some of my oldest work at very affordable prices, which was a succesful idea and one I'll be repeating this year. My older work ranges back over 20 years--besides paintings there are drawings, watercolors, lithographs, monoprints and etchings. When I first hauled all this out last year I was struck by the many connections and progressions leading to my current paintings, and by all of the paths both explored and abandoned that were evident. These thoughts come again as I once more begin to arrange and organize this work.

Midlife maturity has definitely taken the edge off the rather surreal, sometimes jarring stream of images I produced in my grad school days in the mid-80s...but I enjoy these older images for their wild color, and their uncensored, unedited energy and general strangeness. The painting pictured here is titled The Nature of Change, 54"x40" (1984.)

An interest in black and white nature imagery in the early 90s resulted in a pile of large charcoal drawings that are dramatic in their contrast and use of line. Some of these forms and compositions later evolved and appeared in color, in large acrylics and oils. And in a series of abstract paintings from the mid 90s, the roots of my current color and texture-oriented imagery are clearly evident. These went dormant during an abstracted, though fairly representational landscape phase that lasted until around 2000, when "abstract" began to assert itself over "landscape." I also noticed that as far back as grad school I have used multiple panels and geometric divisions in my work--very important in what I do now, but I hadn't realized it had such a history with me.

Like many artists, I guess, I tend to dismiss my older work as less interesting or worthy than whatever I am doing at the moment--but in revisiting these things from the past, I see the turning points and milestones on this long journey. And in doing so I find myself regarding it all with considerably more affection and respect.  ¶ 1:48 PM 0 comments

I am very pleased to announce that I am now represented by Wilde Meyer Gallery in Scottsdale, AZ in addition to my other fine galleries. The painting shown here (Ramble, 57"x24")is one that I shipped them along with several others this week.

Thanks very much to two artists friends represented by Wilde Meyer, Gregg Rochester and Timothy Chapman, who spoke on my behalf to the gallery. I'm really looking forward to my association with this busy, active Southwestern gallery. And it's like coming full circle for me, since I lived just down the road in Tempe in the early 80's while earning my graduate degree at Arizona State.  ¶ 10:17 AM 0 comments

On Sunday my 16 year old son Ross was awarded first place at the annual regional high school art exhibit (17 schools take part)at The Phipps Center for the Arts in Hudson, WI. Here is his piece, a clay box with red oxide stain. The inside of the box is inscribed, in small, neat letters, "How am I not myself?" attributed to one of his favorite films, I (Heart) Huckabees.

Ross kept his award a secret so it would be a surprise for me at the reception, which it was indeed. I am very proud of him, so please excuse this bit of art mom bragging!  ¶ 9:01 AM 0 comments