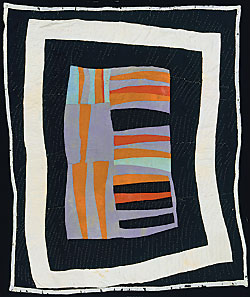 In 2003, the first exhibit of Gee's Bend Quilts came to the Milwaukee Art Museum, and I saw it during a major transition phase in my work. In an attempt to energize my organic, nature based imagery I had started to use multiple panels together, but the format I was using at that point was a fairly predictable line-up of same-sized panels, and my colors were uniformly earthy. Seeing these jazzy, improvizational quilts, with their unusual color juxtapostions and turns of design helped to bring important changes in my studio. To read more about that, please visit the essay section on my website's artist page.

If you are not familiar with these quilts, they were "discovered" by the art world in the tiny, isolated town of Gees Bend, Alabama. These dynamic quilts were made by a close-knit group of African-American women who had absolutely no exposure to modern art movements, however much many of their designs call to mind modernist paintings. (Perhaps pointing to the roots both have in common in traditional African design.) The Gees Bend quilters emphasize individuality and inventive use of materials, and their approach has been carried out for four generations. Many of the quilts on display in that first exhibit were taken right from beds where they were being used (I have to hope that something was offered in return to keep the bed's occupants warm.)The quilt pictured here was made by Loretta Pettway in 1960.

A second exhibit, called Gees Bend: The Architecture of the Quilt, is opening October 8 in Indianapoils and will be touring to six other locations.   ¶ 8:52 AM 0 comments 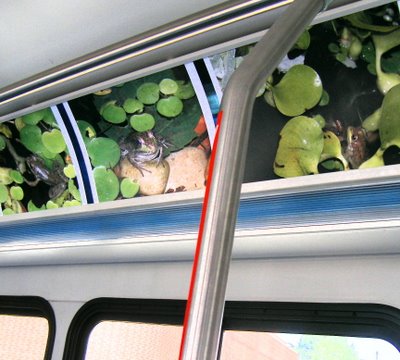 My friend, artist Paula Gorski is the director of Art on the Bus in Eau Claire WI, a project in which she mounts art exhibits on city transit buses. So far there are four buses hung with art that are making their rounds in Eau Claire. Two have children's art and two now have the work of professional artists and photographers.

Now,I must be clear that I don't consider myself any sort of "real" photographer, and cringe a bit imagining what opinions the pros might have of my work. But when Paula asked me if I wanted to take part, I thought, oh, why not?? The idea coincided nicely with whatever it is that's been telling me to lighten up, be a little less concerned about what I "do" or "don't do" as an artist. So I gave her three of the photos I took of frogs in my water garden.

Last weekend I went to the "opening" of this exhibit (the bus was parked downtown at a street fair and passers-by invited in.) When I boarded the bus to look around, there were two little girls admiring my photos. I told them I was the one who took them, and we spent a few minutes bonding over the wonders of frogs. Small children are not generally that enthralled with my work, so I got a big kick out of it.  ¶ 11:08 AM 0 comments

This is my newest painting, called Raku, as it evokes for me the colors and heat of the raku clay firing I observed and wrote about back in July. It's a bit unusual in a couple of ways, in relation to my other work. First--I haven't done any strongly horizontal paintings for several years, but this one evolved rather decisively in that direction. I painted the outer two panels first, and considered that they might work as individual, single-panel paintings. Then I found I liked them best in this position, framing the central dark panel and the small glowing orange/red one.

The other thing that's a bit unusual about this painting is that there is a line drawing in the center panel of an object, a vessel. I mentioned in an earlier post that I'm starting to use some simple, but representational line drawings in my work. I'm not sure what to say about this right now, other than it is an idea that seems to hold interesting potential.

There is a lot of surface texture and nuance not visible in the photo--it's a big piece, 84" long, and this is just a quick picture I took before carting it off to the woodshop to be bolted together. That's where it is now, and I'm planning to send it off to Wilde Meyer Gallery next week.  ¶ 8:45 AM 2 comments 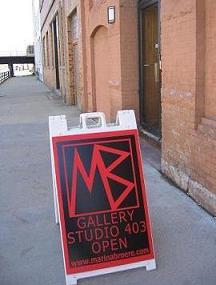 On Friday I visited my new art friend Marina Broere at her studio/gallery in downtown Milwaukee. Marina and her husband Cor are originally from Holland, and have been in the US about 7 years. I first met them a few weeks ago when they had occasion to be in my neck of the woods, and stopped by my studio. Marina had seen my profile (see "Featured Artist" on the Ampersand art panels website)in the current Daniel Smith art materials catalogue, and felt a strong affinity for my work. She was really pleased to discover that we live in the same state and that we could connect in person.

It was wonderful on Friday to see Marina's paintings. They are beautiful--very subtle and luminous, comprised of many layers and washes of paint. I saw in them something that she and I share, a delight in nuance and ambiguity.

Marina has invited me to participate in the annual Studio Art Crawl in her historic studio building on Dec.1-3, and plans are also in the works for a solo show for me there in the spring. I'm so pleased to have met her.  ¶ 10:13 AM 0 comments

Sunday, September 10, 2006
river: catalunya This photo shows an older painting of mine (River: Catalunya, 2001)waiting to be hung in its new setting, the home of designer Jon Thorpe. He has considered every detail of his incredible house with elegance, aethetics, function, and his family's particular needs in mind...so I'm really honored that he has chosen to place my painting in his dining room. 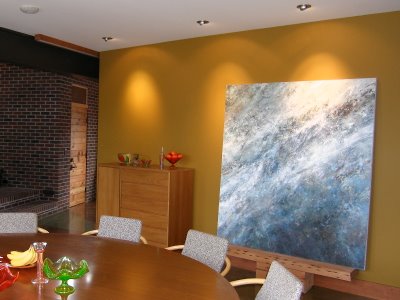 The house is in a beautiful setting with large windows facing water frontage, and features (among other things) a three-seasons porch with fireplace, hot tub and sauna, celing angles that create an abstract wave-like form, and a kitchen outfitted with every convenience you could possibly think of (and many, I am sure, that you will not.) I could go on and on, but fear sounding like an overblown real estate ad...and since the place is definitely not for sale, I'll stop!

Jon has been working on it for years, and his family has just moved in. My husband and I were there last night for a great dinner of Spanish foods, prepared by a friend of Jon and Suzette's who is from Spain. There was wonderful conversation about travels in Europe, and all of it made me dream once again of returning to the place that inspired the painting, the Pyrenees of the Catalonia region, where I spent two weeks at the Centre D'Art I Natura in 2001.  ¶ 11:56 AM 0 comments

Thursday, September 07, 2006
little blocks Times when creative energy is hard to access are so frustrating, but they seem to come with the territory...making something out of nothing day after day is, after all, hard work, and a person gets tired and a little dull. I'm not even talking about major creative blocks. Just the common, everyday resistance to diving in. It's so much easier to procrastinate (by writing in one's blog, perhaps?!)than to face those messy works in progress-full of questions posed but not yet answered.

As much to prod myself as anyone else, here's a process that generally works as a jump-start (to be undertaken while sipping a cup of strong coffee.) Sit, sit, sit for as long as it takes in front of your work. Quiet your thoughts and stare with an open mind. Be very patient. Remind yourself that this is as much a part of the creative process as is actual painting. And eventually something--just one small curious thought--will start to tug at your brain with enough force to get you moving. In my case, I might start to wonder what a certain panel would look like turned on its side, or with a lttle blue in one corner, and that is really all it takes to get me going.

It seems to me that curiosity is the key here, that it unlocks creative energy. The need to see what's next, what will happen. And since curiosity tends to get lost in daily life, in the routines we follow, the chores we do, the routes we take--maybe it needs to be more consciously cultivated.

Charlotte Joko Beck, author of Nothing Special: Living Zen, is a big advocate of curiosity. She finds that if a person lives moment to moment with a sense of curiosity and wonder, mind-numbing thought patterns like self-centeredness, self-criticism and vague anxieties fade away. Her book provides wonderful guidance towards a clearer and more curious mind. Since negative and habit-bound thoughts tend to sap creativity, it's a great read for artists, Zen practitioners or not.

The other night I caught a bit of a documentary on TV about Beatrice Wood, known as the "Mama of Dada"--a ceramic artist who at 100 years of age described herself as "always curious" to see what will happen next in her studio. She lived to be 105. I'm off to the studio with the thought that at half her age (ahem) I have decades left to see what will happen in my own work.  ¶ 1:56 AM 0 comments 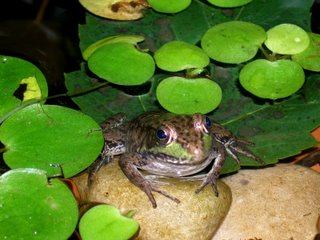 The first occupants of my water garden were a dozen goldfish, but sadly, they all died within a week(it was a very hot week, so that might be why.) Shortly after their demise, though, a bunch of frogs moved in...since then I've been spending a ridiculous amount of time enjoying their calm amphibious vibes. I love they way they sit immobile for minutes on end (even when I'm right in their weird little faces taking photos.) They lounge on the edge of the pool, or float meditatively amid the plants before disappearing under the water.

The other day there were five of them lined up beside the water. I took their picture, then became occupied with some gardening nearby. I looked up a few minutes later to see my black cat Cole stalking them from a few feet away...even though I didn't really think he'd actually catch any, I picked up a pebble to throw in their midst. Cole was quick though, and before I could toss my rock he made a sudden long leap. The frogs of course were fine--in spite of their usual lack of movement, they can scatter pretty fast. Cole, on the other hand, landed right in the water which is really the worst indignity for a cat. It was very funny. I hauled him out and he retreated to clean himself off with wounded dignity.

(This post has nothing to do with my paintings, OK?) 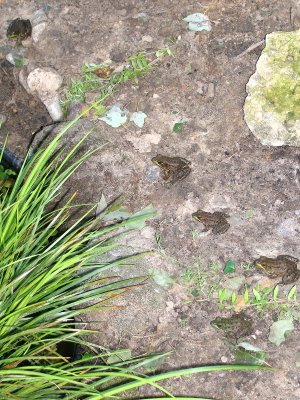 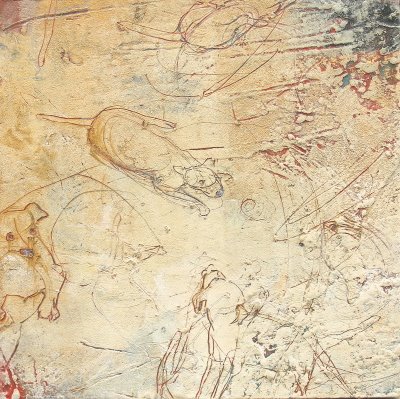 The small dog paitings I sent by request to my Scottsdale gallery for their Dog Days of Summer exhibit (see June 28 post for photos) proved popular and have been sold, so here is one of a second batch I recently shipped out to them. It is 6"x6." I have very much enjoyed doing these small line drawings in paint, even though at first the idea of depicting dogs was a bit odd for me. Now I find that these images (plus some recent figure drawings) have begun to suggest new ideas in my other work (OK, what I think of as my "real" paintings.) Suggestions of animals and figures may be making an appearance soon...stay tuned.  ¶ 8:46 AM 0 comments