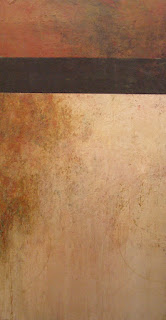 Last weekend I took myself on an overnight retreat to a cabin at a nearby spiritual center--an escape from daily demands and a gift to myself of time alone in the woods. An impulse led me to pack along some old art notebooks and sketchbooks, and I enjoyed looking through them to see what I'd find. The ones I brought happened to be from 2002-2003, at the time my work was turning toward abstraction in a way that proved lasting. (In the years leading up to that turning point, I had gone back and forth between abstraction and representational landscape.)

The emotional and intellectual struggle of this transition was clear from my notes--the changes that happened in my work were forged from conflicts and questions about what I was trying to achieve, which went on for several years. I wondered, for example, if I would lose the audience I had built for my poetic, atmospheric landscapes, and whether abstraction could inspire equal emotional response and involvement. I searched for a way to move my work into abstraction, settling on an exploration of textures found in rocks and other natural forms, and I questioned whether these images would have meaning if separated from their identifiable sources.

From my perspective of ten years later, I see that these questions and struggles, although a bit surprising to read (time has dulled their memory) were good ones--and that all were resolved in a positive way, and necessary to the process. But what a difficult time it was in the studio. Back then, and for many years, my work was wrought from considerable struggle. There were notes, for example, about a single painting that I worked and reworked for about six months, and then completely painted over after one exhibit...and it never was resolved (and sits today in my storage bin, unfinished.) Day after day I wrote notes about this painting, sometimes feeling up, sometimes down about where it was heading. There were many other paintings that I criticized, reworked, and did eventually resolve. From my notebooks, I can see that almost every studio day involved a great deal of soul searching, and energy focused on understanding my own process and desires for my work. The bottom line was that it took a lot of emotional and physical energy to sustain my painting practice.

Now, it seems to me that the situation has shifted, and the energy flows to me from my work as well as the other way around, and so is a source of sustenance to me. Of course there are still struggles, and times of transition--there's never anything particularly easy about bringing new work into the world. But nowadays going into the studio almost always gives me a feeling of excitement, and a flow of ideas. If I look at my work and see it is not what I want it to be, it's simple matter of going back at it, without accompanying inner drama. When things don't go well--and of course there are those days--it is now much, much easier to step away, shrug it off, take a break, and know that the situation is temporary. I can't say, of course, that the major struggles are all done...time will tell. But, after 25 years of serious dedication in the studio, I do appreciate what I've gained in terms of peace of mind and pure enjoyment in my work.

Thursday, March 15, 2012
thin veil One evening when I was in Ireland, an Irish woman with whom I was discussing faerie lore and other ancient traditions remarked that "the veil is very thin here." The veil, that is, between the everyday world and one more mystical, powerful and spiritual. This phrase passed through my mind many times in my remaining days in Ireland. The beauty and atmosphere of the landscape, and the ancient and mysterious stone monuments I visited all brought her comment to mind (as did talk of Miss Worby, the resident ghost at the Tyrone Guthrie Centre where I was staying, whose existence seemed to be generally accepted and acknowledged.)

The idea of a thin veil for me was both metaphoric and actual--mixed in with the emotional and sensory memory of the atmospheric mists around Annaghmakerrig Lake. (See my previous post.) While in Ireland, and working with acrylics on paper, I began experimenting with this idea in paint, using thin washes of color, and since returning home I have continued this exploration.Below is a detail shot one of the acrylic pieces I did while at the Guthrie Centre...it's not very developed but I am leaving it as it is, a sketch that captures this memory. 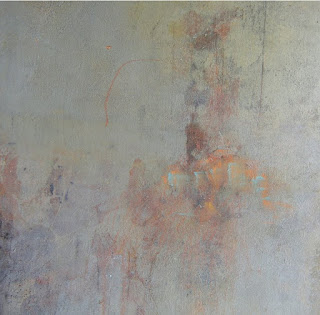 Here are three paintings in my current Veil series, all recently completed, each 26"x22," mixed media and oil on panel. I believe there are more to come along. 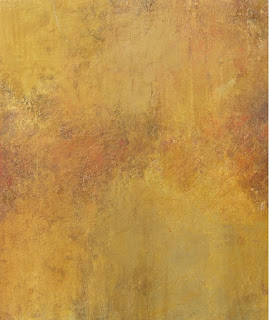 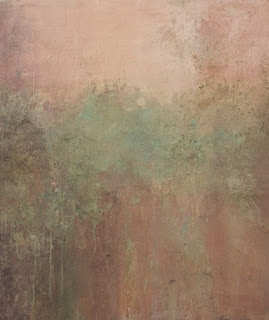 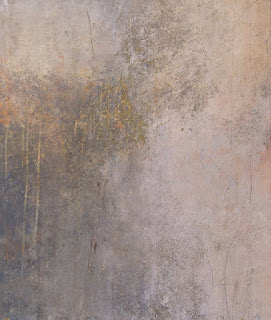 Recently, another artist told me that she thinks my work is about "sensory memories" of places that have affected me on an emotional level. I was impressed by this description--in all the artist's statements and blog posts I have written over the years, I have not thought this out for myself in such a concise and accurate way.

"Sensory memories" beautifully sums up the idea of a personal abstract language resulting from certain visual impressions, experienced in the context of emotional atmosphere and filtered through subjective responses. This rings true for me--moments when I am moved and visually excited by something in the landscape stay with me in a deep way, and are what I am compelled to explore in abstract terms. These moments have a special intensity or emotional charge, and come upon me in an unplanned, unexpected way when I'm alone in nature. They have a spiritual dimension in that I feel a strong connection to my surroundings. While other aspects of a landscape also impress and interest me, and provide visual ideas, it is these special moments that truly fuel my work.

For example, when I'm painting and think of my time in Ireland (a current influence on my work) my first thought is a memory of a walk I took alone on a misty evening when all the plant life was glistening with rich color up close, though hazy when seen in the distance across the foggy lake. The trees were beginning to show their autumn colors and there were brilliant yellow leaves under my feet. I felt delight, wonder, awe, energy. I took some photos and then just walked and looked. I can still remember vividly not only the visual aspects but also the smells and the feeling of the moist, cool air. This was an hour's time out of five weeks of working and traveling in Ireland, but the sensory input of the experience was so rich, and the emotional feeling so magical, that it is my primary memory of my trip. It also seems to sum up a great deal about the landscape there, to represent an essence of the textures and colors of the country as I experienced it. Several other sensory memories also stand out, of visiting megalithic sites on a rainy hillside, in awe of the ancient mysteries surrounding them, and these also become part of the mix that influence my current paintings.

Of course I have plenty of other vivid memories of my time in Ireland, as any visitor to another country does...but it's these few that feed my work in a significant way. I imagine this is a common experience among creative people, this selective sensory memory--otherwise the input would be overwhelming. Our quirky internal filters identify certain ideas, memories and experiences for our focus, and others play only supporting roles. The amazing thing is that strong sensory memories tend to capture an essence of a place or time that is truly poetic and deep, and to offer up some wonderfully rich sources for creative exploration.

The recent painting above, as yet untitled (24" square, oil and mixed media on panel) is one of a series in response to the aforementioned misty hike.  ¶ 2:37 PM 4 comments 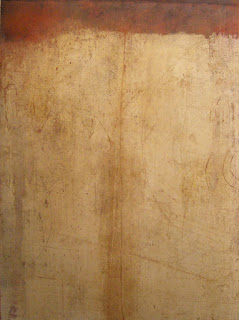 What I think of as my "white paintings" began back in 2008 during a residency at the Centre d'Art I Natura in the Catalonia region of Spain, as small works on paper. They seem to arise from the arid atmosphere of the mountainous region in late fall, as well as from the pale interior walls of an ancient hermitage building I liked to visit and draw. Later when I was back in my studio in the US, I found myself turning again and again to white and variations of white in my oil and cold wax paintings.

Many paintings later, I retain this fascination. Often, the underlying layers are saturate in color, or dark in value, hidden by the final few white layers which pick up only slight aspects of color from underneath. Sometimes, the white surfaces suggest snow, or rock, or old walls. Most consistently, white and its variations evoke for me a sense of luminous, weathered, aged surfaces, bleached by sun and time--pared down, subtle and quiet. Click here to see a selection of white paintings from the past few years on my website (there are others scattered throughout the various series listed on the paintings page.)

The painting shown above is the largest completed panel (48"x36") in an unfinished work that will be extended vertically with several other panels yet to be added. This painting and several others were inspired by inscriptions and markings on old parchment. A close-up of this painting is shown below. 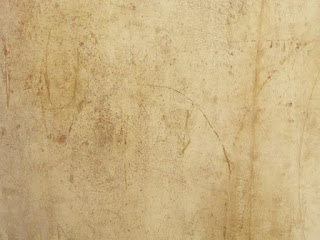 This ongoing exploration of white (or pale) surfaces seems to me a case of content following form...a fascination with this particular color has led to so many variations in meaning. Of course it is hard to say which came first, the visual intrigue or the associated meanings, but I feel a sense of tapping something deep in these white paintings.  ¶ 10:36 PM 6 comments