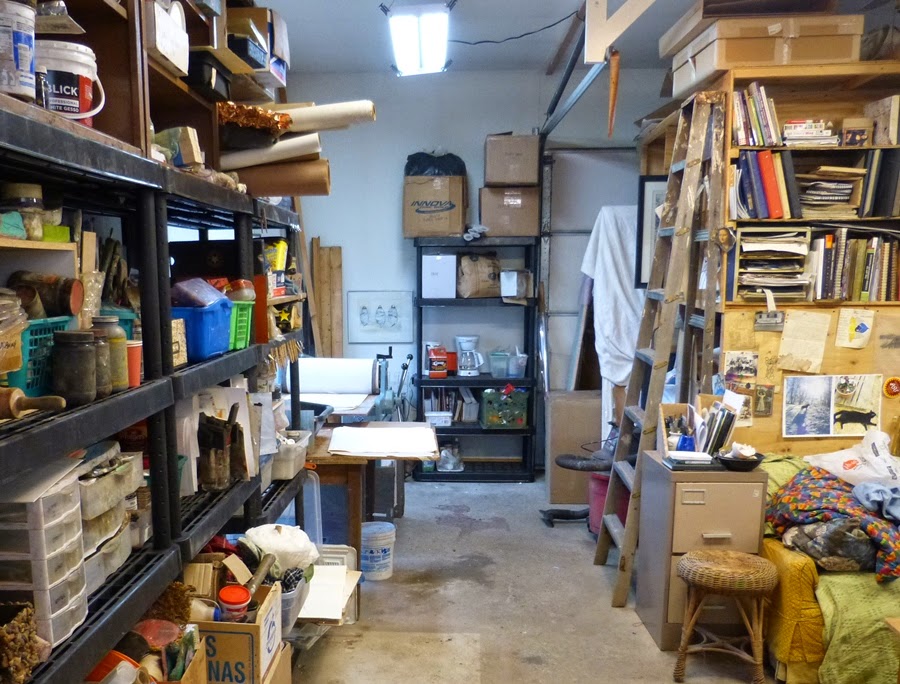 Since the day in mid-December when my son decided I needed an assistant and offered up a friend of his for the job, my studio has entered a new phase. With Kara's help, new shelves have replaced the rambling counters and piles of the past, and my smeared and dripped end wall has been freshly painted. Now workshop materials, various drawing and painting media, and printmaking supplies all have their places. Best of all, the floor space has opened up and the working area feels much more spacious.

When I first considered hiring Kara, I wasn't sure I'd have enough for her to do. Now I wonder how I did without her--there are plenty of chores as well as larger projects to take on. Since she started working here, she has been putting in about six hours a week at various jobs--she's taped and gessoed lots of panels, sorted out all of my powdered pigments, helped prepare for my shows in January (attaching hanging hardware, wires, and wrapping panels for transport), and organized supplies for my workshop in Tucson in February. Next week she'll help me set up for a studio workshop. Usually when she is busy with these things, I'm painting, and being able to hand off so many chores and turn to my work seems an amazing luxury.

Besides being a hard worker, Kara is also a smart problem-solver, and I find her input and energy very valuable when it comes to organizing. For example, when my paintings were returned from a recent solo show,and there was nowhere in my stuffed storage racks to put them, she took the initiative in dealing with this one remaining area of chaos in the studio. (In the past I'd have just piled them in some corner.) Organizing my inventory--both the paintings and the related data--is a project I have had in mind for years to conquer. Now every painting in the studio is photographed, wrapped and labeled, and Kara is about halfway through entering all data on all of my work that we can account for in Artwork Archive, a web-based platform that is easy to use for storing images and information. 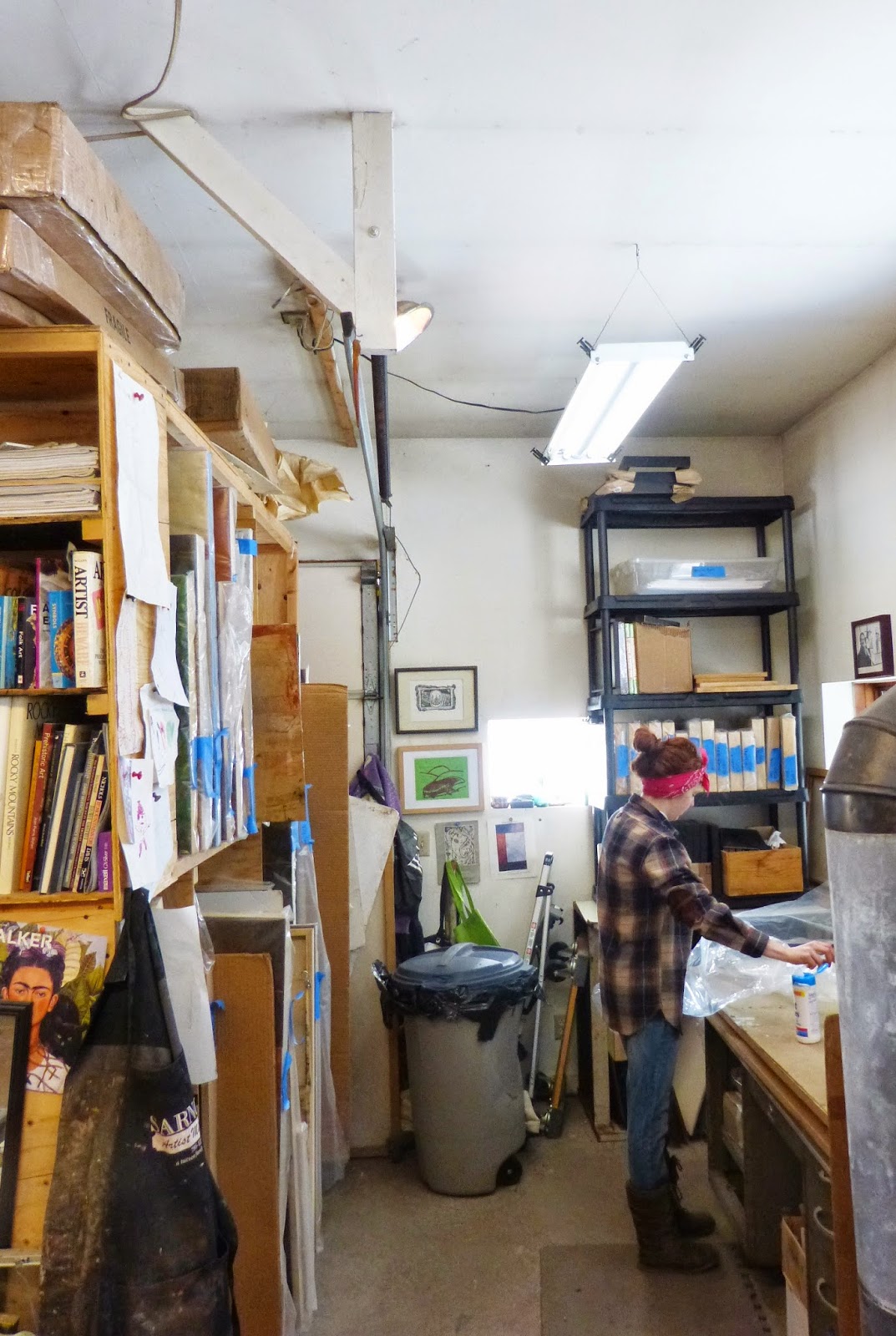 As I experience now the difference it makes to have this help, I'm more aware than ever how much there is to do--always, every day--for those of us who rely on our art for a living. Like most artists in my position, I've done everything myself for years. I'm fortunate that my husband and son have also been able to pitch in with certain needs (such as transporting panels, crate-building, trash removal, and heating in winter.) But the list of tasks and responsibilities needed for making a living from art work and teaching is immense, and also so varied it can leave one feeling quite scattered. Perhaps the most challenging aspect is to always give painting due time, with the demands of business in its many guises.

Once a friend of mine told me that she imagined my life as an artist to be very relaxed and idyllic, lots of sipping tea and gazing at sunsets...to which I laughed out loud. It is deeply satisfying, rewarding, and exciting--yes! And there are indeed many lovely times, quiet and focused, alone with my work. But there's also stress, overload, and exhaustion.  As hard as I work, as full as the days are with trying to keep everything going, there are forever loose ends fraying, follow-ups forgotten, and urgent emails buried in the inbox. It's easy to fall into a frustrated mind set in which the undone tasks loom large and seem crucial to moving forward, gaining more income and recognition. At these times, "que sera, sera" is a soothing thought.

Of course, I am wary of whining or complaining-- I love my work and my life, and am grateful even for the busyness and overload, since it means that things are happening and my career is growing. It is wonderful to be in charge of my own time, to shape my goals and feel pride and accomplishment in what I do. But I'm also feeling the urge to tell it like it is, to talk a little about the demands, the stress, and the more tedious aspects of keeping things going--not just for myself but in support of everyone living this crazy art life.

People often ask me how I do everything I do, and the simple answer is that I'm almost always working. To be able to spend a little more time painting and a little less on the more practical tasks of studio practice is a tremendous gift. 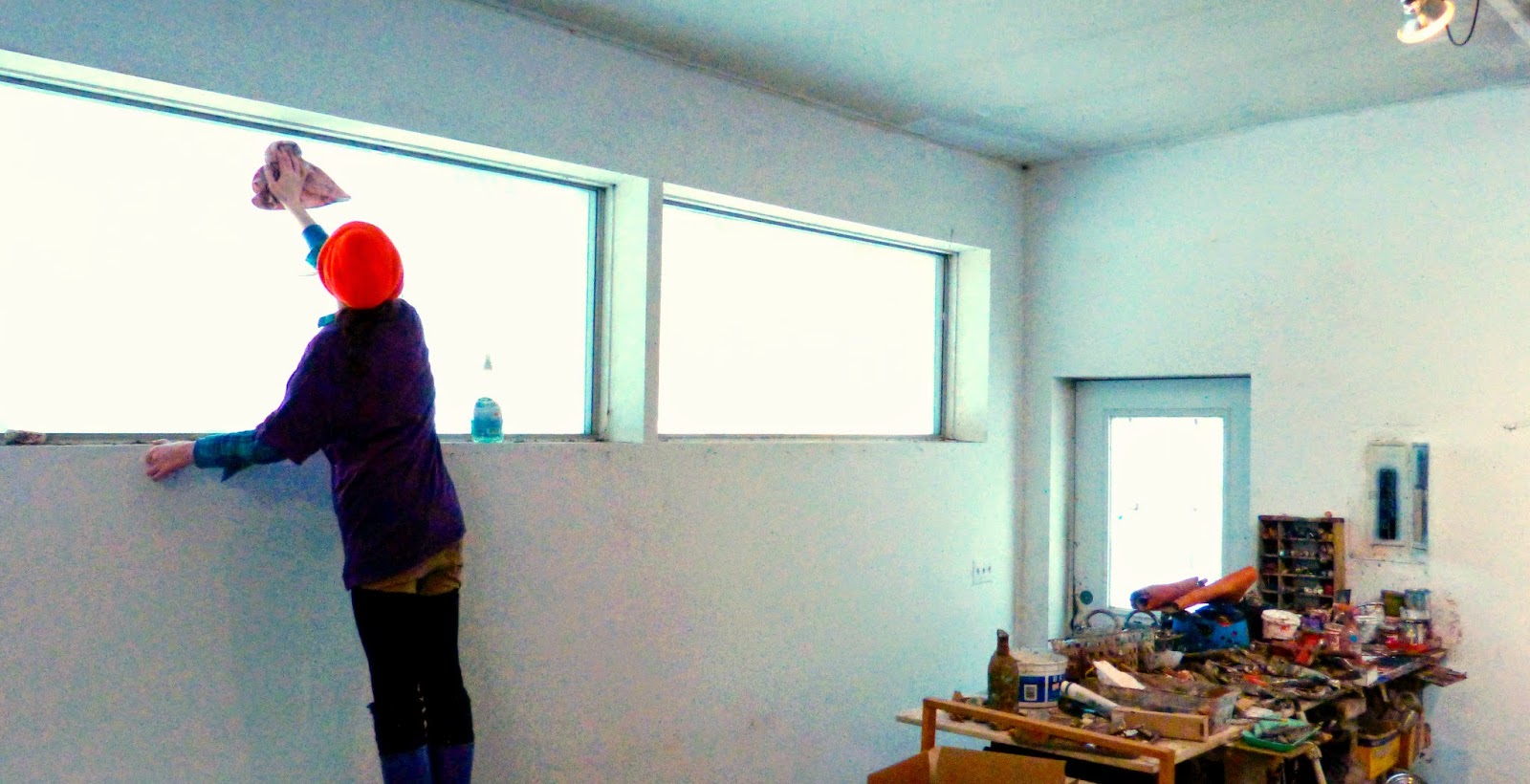 Monday, March 02, 2015
color and process A surprising change has come over my work this winter--my typical earthy palette has shifted to brighter colors--reds, oranges, blues, greens. These are not garishly bright--they are tempered by earthy undertones and neutrals. But the overall effect is noticeably more colorful than most of my work has been in recent years. .

Playing with bright colors came over me as an intuitive urge to follow. It began with the painting below, Quay #1, painted in December with memories of the surfaces of old boats seen at various docks in Ireland last fall. Since most of my work is referential, arising form visual experience, these boats were a way "in" to using more color.  I was struck by their remnants of bright paint clinging to more neutral weathered surfaces. I took a number of photos of these boats--see below.


I followed Quay #1 with others-- opening up to a spectrum of cadmium reds and oranges, emerald greens and various blues. Some of my recent paintings relate to the boats, others to the lovely bog plants in Co. Mayo some are less specific or involve combinations of influences. All involve joyous play with color.


While i experienced this shift in the moment as an intuitive urge, in looking back I can see that there was actually an evolution of the idea, fueled by various experiences and influences. One of these was the commission work that I completed early last October for the new Sheikh Ahmed Bin Zayed Center for Pancreatic Research on the campus of the MD Anderson Cancer Center in Houston, TX. The designer chose five older paintings of mine on which to model the new paintings, and they were some of the more colorful ones from my past.  So I found myself working in a brighter palette than I had done for some time, and on a large scale. At first I felt a bit awkward with the palette, but soon it felt like a natural rediscovery. Below is one of the commissioned paintings.


My time in County Mayo, Ireland this past October and November was another push toward color. My brother Hugh, a botanist, visited me, and walking with him on the bog I found myself looking very closely at the plant life. The bog from a distance appears an earthy, warm brown--but zooming in, it's an entirely different visual feast---tiny gardens of intense greens, dark reds, pinks and purples. These colors haunted me after my return to snowy Wisconsin in late November. 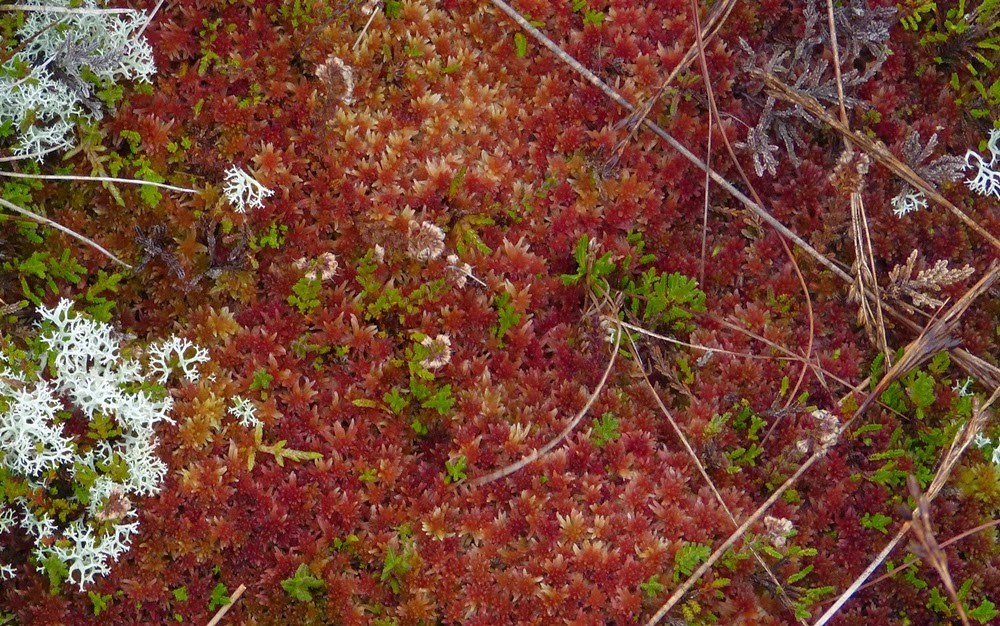 Winter does often make me long for color, but this one has been particularly bleak, with the death of my mother in late January. At the time of her death, I was already well into my new direction, and in continuing on with it, I've felt a welcome, positive energy. It's quite the opposite of what I might have imagined as a response to death--something dark and somber---but color has felt right to me. I am remembering with a smile that my mother tended to like bright colors and often commented that my wardrobe (heavy on blacks and neutrals) was too dull. A painting of mine from 1999 that she chose to own was full of lively greens. So I think that she would appreciate these new paintings.

And finally, the work of my friend, Janice Mason Steeves has had a major impact in opening my eyes to the power of color. Her glowing canvases, some very large scale, are intense and compelling, and create a visceral response in the viewer. These paintings have made me reflect on how strongly we humans are drawn to color and light. The image below is from her exhibit that opened in January, Gathering Light, at Gallery Stratford in Statford, Ontario.


So, while the move into color may seem a bit sudden, it's actually been incubating and growing over the past few months. In some ways it goes even further back; I did a few colorful paintings in Ireland in 2013, although I did not sense a new direction at the time. But I've been dipping my toes in for a while.

I feel that it is the combined impact of these various influences and experiences that has tipped the balance in my palette from earthy to colorful, at least for now. I love it that the creative process is so complex, the weaving together of many strands of experience and thought over time. It is magic to see how all the various influences--many not even consciously recognized in the moment--combine in such a way that they to pull us into new territory.  ¶ 8:56 PM 5 comments