Tuesday, December 30, 2008
art income My old friend, Cheryl Russell, has posted some information about artists and their incomes on her blog, DemoMemo. Cheryl is a well-known demographer and author of the recent book, Bet You Didn't Know, who researches all sorts of trends in American life. When we were exchanging holiday greetings by email last week, I asked her if she had any statistics about the number of artists with advanced degrees in art who earn a living by selling their work as their only source of income.

She came up with some interesting facts, although the specific data I asked about were not available. The figures she has are from the National Endowment for the Arts survey, last published in 2005. For some reason, the NEA includes in their category of "Fine Artists" the occupations of animator and art director. This skews the median income a bit, no doubt--it is listed at $45,200 for full-year, full time workers.

Cherie has a link with specific information about women artists in her blog post. In the NEA's category of Fine Artists, 47.4% are female, and earn a median income that is $15,200 less than men in this group, even though female fine artists are usually 5 to 6 years older than males in that field, and a higher percentage have attained a bachelor's degree or higher level of education. 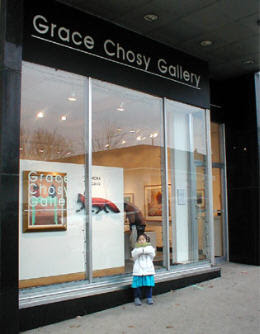 I have been asked to be in a 2-person exhibit (with Audrey Sargeant) at Grace Chosy Gallery in Madison, WI in March--I'll be showing from March 6-28, with an opening on March 6 from 6-8pm. The gallery is located at 1825 Monroe Street in Madison. I'm really pleased to be asked to do this show, since I'm new at the gallery (since October.)

Agreeing to participate has jolted me out of holiday haze--I only have about 6 weeks to prepare. The gallery needs all information about the work by mid-February. Fortunately, I have quite a few paintings in progress, and I don't really mind an upcoming deadline--it helps me focus.  ¶ 10:32 AM 2 comments 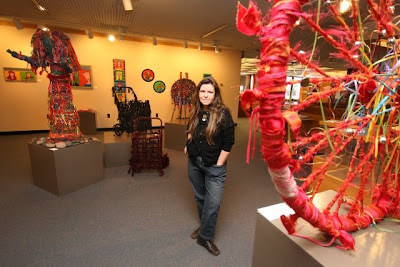 Below is an excerpt from a review I wrote for my friend Paula Gorski, whose exhibit of paintings and sculptures is currently on display at the public library in Eau Claire, WI (which has an excellent gallery area.)

I’ve been a close friend of Paula’s for thirty years, and I thought I knew her work very well. Yet last week was the first time I’ve been alone in a gallery filled with her paintings and sculptures, the focus totally upon this body of work spanning about ten years. The exhibition area at the library was quiet on a weekday afternoon, and although I had seen all this work before—I’d helped her hang the show, and had seen some of it as she was working on it--it appeared to me in a new and fresh way in this setting.

I saw, initially, the bright colors of her paintings, with their simple, iconic faces and magnetic alphabet letter inscriptions, and the rich fabric textures of her 3-D wrapped objects (these include sculptured ladders, shopping carts, an exercise ball, and a towering female figure.) A collection of objects in a display case—journals, toys (wind-up robots, a PeeWee Herman doll, a plastic ET) and weird finds (including a leopard skin platform shoe) illustrate her statement (spelled out in one of her paintings) that she lives in “a house with many things.” There is the sense of a cheerful, imaginative spirit at work, an artist who transforms the ordinary in an unexpected and engaging way--and who is drawn to the quirky side of life. This is the aspect of Paula’s work that elicits the many variations of “fun show!” that fill the library’s guest comment book.

Yet there is more here, a deeper thread of wisdom and spiritual awareness that lies beneath the “fun” exterior --an acknowledgement that people’s lives are often difficult, complex and painful. Woven together with references to death, loss and suffering In Paula’s work are messages of acceptance, joy, faith, and compassion.

Paula has a special knack of elevating personal narrative to a universal level, for telling offbeat stories of her own life that invite the audience in. "It’s Hard to Be Paula Gorski" the letters on one painting declare--a statement that reads not as self-pity but as a wry remark about the human condition. "Boyfriends" describes in acrylic portraits and brief narrative three men in her life who ultimately let her down, yet the way they are presented—bright colors, deadpan faces, the little quirks of their appearances--render this story darkly humorous. It is a bit of human relationship drama observed, a story we’ve all been through.

On a deeper level, a theme of interplay between spirituality and everyday life runs through much of Paula’s work. "Pachamama" is a nearly life-sized version of the smaller wrapped female forms that Paula has been making for years. It was created using techniques that Paula learned from her grandmother, who made rag rugs from cast off clothing. This use of fabric wrapped cotton cord--seen in various other sculptures in the exhibit as well--requires the kind of repetitive motions that are part of traditional women’s work. This type of work is not often seen as anything other than humble and ordinary, and in this case the result is something resembling a child’s doll. Yet "Pachmama" large in scale and elevated on a pedestal--has a powerful and mysterious presence. Her featureless cloth face hovers above the viewer, her arms raised away from her body as if in blessing

The theme of spirituality expressed through transformed, ordinary objects can be found in other work in the show, such as the two sculptural ladder forms and a wrapped bike tire called "Mandala." Like "Pachamama," these are made using cloth wrapped first around cord and then around an armature, and finally embellished with sequins and beads. The repetitive nature of this technique makes reference to meditation, prayer and other ritual practices.

Tuesday, December 16, 2008
a blog to follow...more thoughts on photos I have recently found a new blog to follow, by Nicholas Wilton, a California abstract artist. I really enjoy both his paintings and his concise comments about them, and relate to a lot of what he says about his process. His blog is especially appropriate to mention now, following my last post and my ruminations about referencing photos. In his recent (Dec. 8) post, Nick posts several pictures of old barns along with related paintings--their imagery distilled to pattern and texture by his abstract vision.

The photo below is one of those I mentioned in my last post--as something I did not actually look it while painting, but which had created a strong visual memory. This morning when I actually found the photos I mentioned in the post, I saw that what I recalled visually was more like a composite of several walls, some with graffiti and other linear elements, and some like this one, where the crumbling texture was most noticeable. 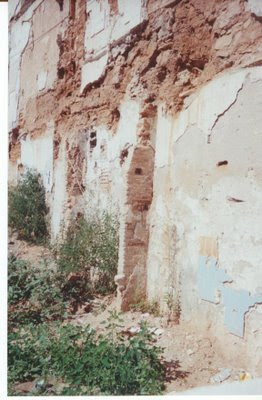 I never start a painting from a photo, and rarely even look at one while I work. But often, as I start to hone in on finishing something, what I have going with the paint will trigger an image or memory of something that I've photographed in the past. In this case, it was an old wall in Barcelona that had been plastered over many times. Graffiti and other marks had been made over time, traces of which appeared and disappeared on the crumbling surface. I took several photos of it on my trip there in 2001, finding it very beautiful and mysterious.

The eroded looking top layer of this painting evoked that memory for me, and led me to darken the bottom half and scratch into the paint, adding the linear aspect of the wall that I remembered. Though the colors and actual markings are very different in the painting, in this case I was working from a pretty direct source (which is not always the case for me.) But of course, it's abstraction, so I was after the idea of the old wall more than anything specific--the idea of a surface with a history, and rich texture created over time.

But the point is, I didn't go looking for the photos of the wall as a reference...instead, my visual impression or mind's eye memory allowed the most latitude in which to play with the idea, to get at its essence. I have found this to be true over and over--even when I was a more realistic landscape painter. For me, photos as direct references tend to get in the way. Sometimes a quick glance as a point of departure, but that's it. The photos of things I like and notice have their own importance to me--quite separate from paintings that arise from memories or visual impressions of those things.

I'm considering all of this in light of a plan I have to put together a small book about my experience at the art center in Spain, which will include both photos and paintings. I love photography, and although there is certainly overlap between what I notice and photograph and what finds its way into my work, I tend to take pictures mostly for their own sake these days, and I'm really enjoying that.  ¶ 6:21 PM 9 comments

Saturday, December 06, 2008
workshop It's a few months away, but I want to give a heads-up about a workshop I will be presenting at Rochester Art Supply in Rochester, NY on April 18 and 19, 2009. I'll be offering an introduction to my technique of layering oils mixed with cold wax medium on panel, and various ways of creating texture and enhancing color interactions. Click here for the details and to register for the workshop.

I intend for participants to explore these techniques and materials in the context of their own individual styles and subjects (the class is meant for people with painting experience.) I was very clear when planning this workshop that it was not to be a lesson in "how to paint like Rebecca Crowell." (My thanks to Marina Broere for her input during a brainstorming session we had on this this past summer.) In fact I expect to learn quite a bit from those who attend as I observe each individual's approach to the materials presented. I'm looking forward to the experience! You can sign up anytime, and there is a very limited number of slots available. Please email me at crowellart@yahoo.com with any questions.  ¶ 8:38 AM 2 comments 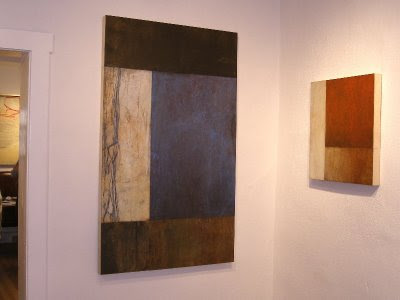 I'm home this evening after 21 hours of driving (in two days)...it's a long haul but I love going to New Mexico. Even when we spend as much time in the car as we do out there--which was the case this time.

Besides having Thanksgiving with relatives and our two sons (who live in Albuquerque) we also hiked around the volcanoes in Petroglyph National Monument, visited with friends, including painter Diane McGregor, and made it twice to the gallery district on Canyon Road in Santa Fe. The first time was to drop off five paintings at Darnell Fine Art, and the second, a few days later, was to see several of them hung on the wall and to visit a few galleries with my ten year old niece and my sister in law.

Above is one of the paintings I delivered, Nightfall (60"x36" oil on panel) hung at Darnell beside a small work from my July show, Fragments (24"x22.")

Below is a photo I took at the volcanoes near Albuquerque, a beautiful open, windswept area of interesting rock formations, upon which ancient petroglyphs can be found. 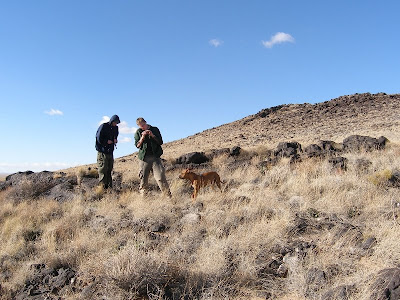