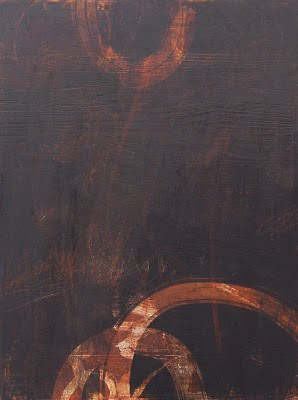 I wrote the following as a description of what I teach during my Oil and Wax Workshops, but it's also about my own work:

This is a process-oriented approach to painting, ultimately a balance between spontaneity and control-- though the control is something that comes with practice and experience.... the basic idea is to observe and react to what develops in front of you...as the painting evolves, the best attitude is to be selective in what to emphasize and pull out for the final version, while at the same time, maintain an attitude of non-attachment and free experimentation. With these techniques, changes can be made rapidly...and while at times your work may seem to go from good to bad, nothing is really lost, and change is always possible.

Since I've been working with various cold wax and oil techniques for quite a few years now, I feel I've gained a very satisfying degree of control over the painting, but it can still be a wild ride with plenty of surprises--which keeps things interesting. The painting above, Coiled (24"x18" oil and wax on panel) is a case in point. I had completely covered the surface of the panel in sepia (perhaps in frustration--I don't remember now.) When I went back into it with a solvent-soaked brush and squeegee, I was excited to see the multiple layers of pattern and color that emerged. (The layers below had also been built up with layers of solid color cut through with solvents.) A bit of selective tweaking of the surface, in order to create some variation in its thickness, and some additional scratching completed the painting.  ¶ 1:30 PM 3 comments 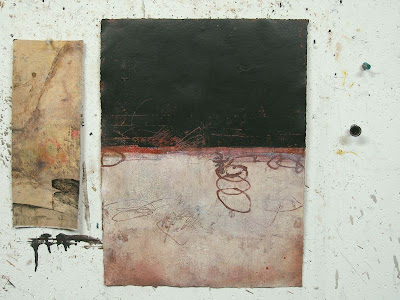 This photo shows a bit of my studio wall with some mixed media on paper work tacked up. I took it simply to document the larger painting, and loaded it into my editing program intending to crop the background and save that image. But the visual impact of this unedited version struck me. The drips and push pins on the wall have their own parts to play in the composition, as does the smaller strip of paper--something I'd cropped from a larger painting and was playing around with as a collage element. This bit of well-used wall has an unexpected beauty and rightness about it, so easy to overlook when focused on some task or idea.

During last weekend's studio workshop, we talked several times about the beauty to be found in old walls, sidewalks, and time-worn objects, and how once you begin to focus on them, to "see" them, a world of textural and color possibilities opens up. We all seemed drawn to the intricate textures and patinas that evolve over time on these kinds of surfaces that collect bits of nature and the scuffs and dents of human use.

I like the fact that the processes that I use in my work, both in cold wax and oil, and in mixed media (as shown here) are in some ways congruent with these natural process of accumulation and weathering. Layers are built up and then eroded or scratched into, and a variety of marks and stains made in passing contribute to the richness of the surface. Of course, I also edit and give careful thought to composition and other elements of art when I work--thus steering the work in certain directions, while much of the basic texture retains its random feel. In the photo, I like the juxtaposition of the paintings with the wall that has similarly evolved.  ¶ 9:12 PM 6 comments 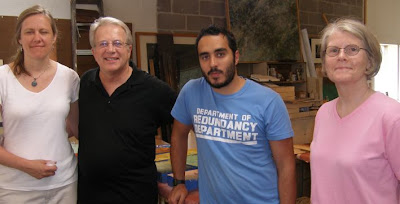 I just finished an Oil and Wax studio workshop with the group above--some of the most intensely focused artists I have worked with to date. Quiet, serious concentration on painting prevailed throughout the three days--plus good discussions and many interesting questions raised. Of course we had our share of fun and laughter, too! Thanks Caron, Jim, Eduardo and Barb for your wholehearted plunge into the cold wax and oil process.

Brazilian artist Eduardo Recife had arranged awhile back for an additional workshop day in order to explore my use of mixed media on paper. He had seen some of the paintings on my website that I did with mixed media during my 2008 residency at the Centre D'Art I Natura in Catalonia, Spain, and was curious about my methods. (My project for that residency was to use mixed media, largely unfamiliar to me at the time.)

Though willing to oblige him, I was feeling a bit rusty with my mixed media supplies. So last week I brought them all out, including a few new things I purchased (it always helps to have new toys!) I started several paintings in order to reacquaint myself with the possibilities and to explore some new ideas. My materials for mixed media work include watercolors (which I use full strength); various acrylic mediums; chalk pastels in stick and pan form; powdered charcoal, graphite and pigments; acrylic paints in tubes and liquid form; and assorted colored pencils and crayons, mostly water-soluble types. I keep a variety of surfaces on hand for these including Ampersand Claybord, watercolor paper, and paper made for mixed media. I use the same tools as I do in my cold wax and oil paintings--brayers, squeegees, palette knives and the occasional brush, and many of the same techniques and approaches.

My approach is all-out experimentation, using any and every combination or technique that comes to mind, gradually building up the painting surface. I also selectively dissolve back through the layers with rubbing alcohol or water (this effect is more subtle than the similar process I use with solvents on my oil and wax paintings) and scratch and scrape away at the surface.

I did not feel that I "taught" in yesterday's studio session as much as simply painted, along with some commentary--my mixed media process is far less defined in my mind than is my oil and wax approach and I do not feel that I can explain it in a logical sequence. However this approach seemed fine with Eduardo, who went back and forth between watching and working on his own paintings. For myself, I thoroughly enjoyed the excuse to get back into this mode of painting. I've worked at it sporadically off and on since my time in Spain, but yesterday I felt as fully engaged as I had during my residency--a great feeling.

Below is one of the paintings I did yesterday (Bronze, 10"x8" mixed media on paper.) 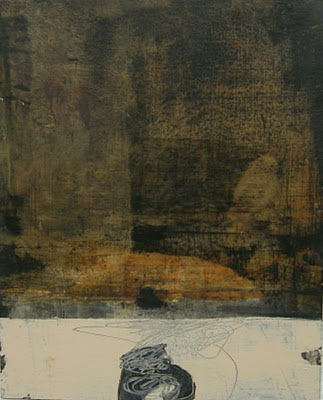 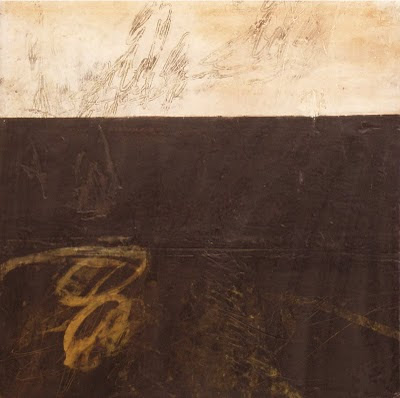 Recently, artist and blogger Lynette Haggard asked me some questions about myself and my work for an upcoming post on her site. One of the things she wanted to know was a bit about early influences, and I'm copying some of what I wrote to her below. Interesting timing because I have just returned from a trip in North and South Carolina, and during my trip I had dinner with my 8th grade art teacher, Penny Russell, who is mentioned in the excerpt for Lynette's post.

Her daughter was one of my best friends in high school, and so besides what I learned in class, I also was privy to Mrs. Russell's "real" life at home. I often saw her latest work when I visited the house, and observed the way that various events in her life and in the world influenced her imagery. This was a revelation--the intersection of art and life. I recall a painting she made in response to the Birmingham church bombing of 1963 in which 4 little girls were killed...I realized that art could be about something outside one's own experience, and could express emotions of outrage and sadness. Of course, I did know this in an academic sense--I'd seen reproductions of Picasso's Guernica for example, but observing this in the work of someone I knew had a more personal effect.

She could also be quite experimental in her techniques--for example I recall a series of drawings made from gravestone rubbings. Another revelation to me, that 2-D art was not just painting and drawing! (I was also rather impressed that she would venture into cemeteries with her art supplies.) And although much of her work was representational, she also made small paintings using a kind of monoprint process, which she viewed as abstracted landscapes, finding and cropping out evocative imagery within the somewhat random process of making the print. I tried some of these myself, and it was my first exposure to creating abstraction with an emphasis on process.

But perhaps what I remember best about those early times at her home was the absolute joy she took in making art. She would show me her work with an attitude of joy and enthusiasm that was infectious.

Below, an excerpt from my answer to Lynette about my early life and influences through young adulthood:

I grew up in many areas of the country, because my father's job was to manage large construction projects like tunnels and dams--things that take only a year or two to complete. I identified myself as an artist from an early age, always making things and drawing. Although neither of my parents were artistic or knowledgeable about art, they supported my interest, and supplied me with materials and occasional Saturday art classes. It's probably a bit unusual that they continued to be in favor of my art ambitions past childhood and on through college and graduate school, and for all of that I'm very grateful. Once they took me to visit the elderly sculptor Genevieve Hamlin, who was a friend of my grandmother's. I was about 12, and was awed by my glimpse of her life. Here was a professional artist, serious, focused. She looked at some drawings of mine and gave me an honest critique, then let me ride her horse. It was a magical day.


A couple of art teachers also inspired me early on. One, who taught me in 8th grade, was the first to engage my imagination through abstraction. We're still in touch and I saw her just recently. Another teacher in high school was a role model for professionalism, with her serious demeanor when discussing student work, and high expectations. Later in college, I was inspired by a number of instructors, including a woman with a small child, who demonstrated to me that family life as an artist was possible (I thought of her often when my 2 sons were little.) I had excellent painting and art history instructors in both college (University of Wisconsin-Eau Claire, BFA in 1982) and in graduate school (Arizona State University, MFA, 1985.)