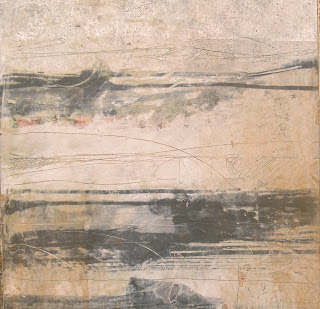 Recently I posted several new small paintings on facebook, including the one above, Strata #1, 12"x12", oil and mixed media on panel. Below is another from what has become a series, Strata #2. 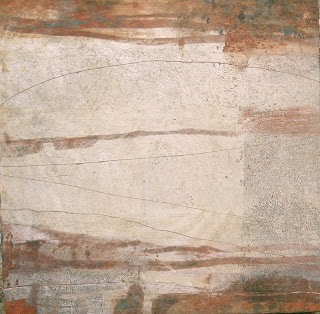 So far I have also done one larger painting that also relates. This one is as yet untitled, 40"x40." 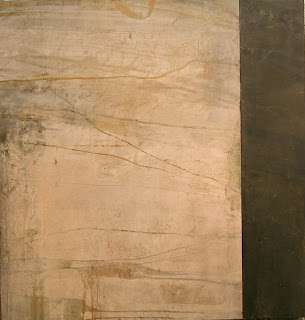 There was a consensus among the people leaving comments about these paintings that they showed definite change, something new in my work. This is true, but it’s not that I have suddenly switched direction and headed off on a completely new road. The truth is, I always have more than one path I am following. Here are some other paintings I have recently finished—I can see relationships between all of my work, both finished or in progress. 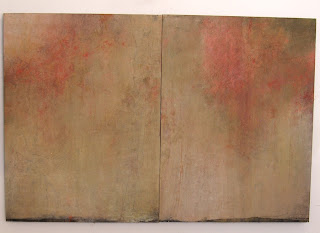 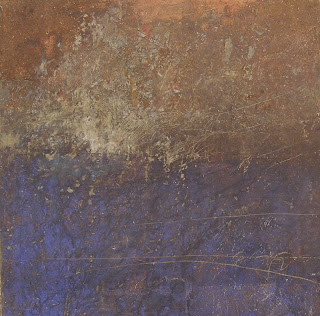 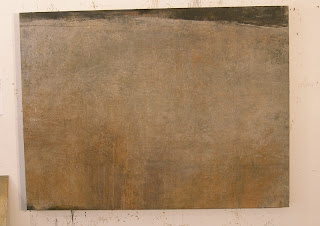 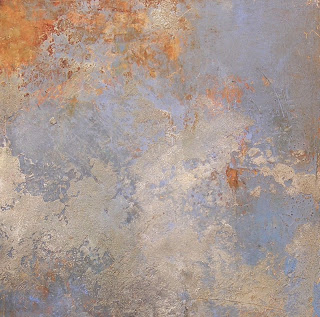 My studio feels rich with ideas when I have various groups of work in play. And I find that change, when it happens, comes about as a synthesis of ideas. I can see aspects of what emerges as a new idea in other paintings, both in those in progress and in older work. For example, I trace the visual ideas in the small Strata paintings at the beginning of this post to the many white paintings I have done in the past, as well as to all the paintings involving solvent lines I've been doing for the past few years (marks made by dissolving areas in the upper layer of paint with a brush dipped in solvent.) For example, this painting from 2011, Zoco #2, 12"x12" oil and mixed media on panel, was an earlier exploration of using a variety of marks and lines made with solvents: 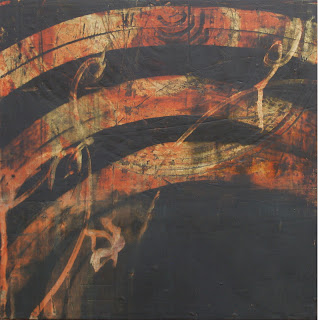 I often think about the principle of unity and variety that we all learned about in Art Appreciation 101--the idea that an individual work of art--or, I would add, a body of work by one artist--ideally embodies both cohesiveness and exploration. The strength, the structure, the staying power comes from what unifies the work...the new ideas and changes keep it fresh.   ¶ 9:26 PM 1 comments

Friday, April 12, 2013
thoughts on abstraction Last week on my drive home from my residency at AIR Serenbe, I stayed with my brother overnight in Columbus, Ohio. The next morning, he told me about an exhibit of Mark Rothko’s paintings at the Columbus Museum of Art and offered to take me--and my plans to get an early start on the road were quickly abandoned.

Called The Decisive Decade, the exhibit traces Rothko’s work through his abstract surrealist figurative work of the 1940s to the beginnings of his signature style color field work of the 50s and beyond. The transformation of his work from abstracted imagery to pure abstraction over a ten year period was fascinating to study. I wish I’d had more time with the work, but here are my impressions from a fairly quick walk-through.

In the earliest paintings, figures and landscape were clearly distinguished. The untitled painting below is c. 1940: 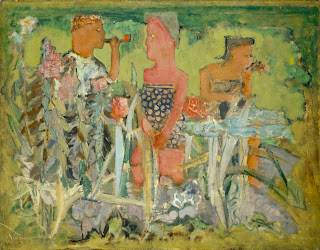 In several other early paintings, body parts were distributed in stacked rectangles in a foreshadowing of his later work. Hints of his later work could also be seen in the number of compositions based on three divisions. He used mythological subjects, surreally interpreted, because like other artists of his time, he believed that myth and the subconscious had power to heal the spiritual void they perceived in society. 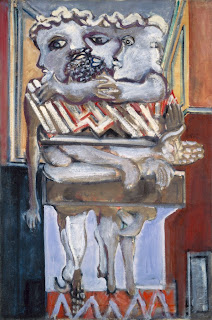 In the paintings from the mid-1940s, his forms were no longer clearly figurative, only vaguely biomorphic, and flat color fields and geometric divisions were appearing, as in the work below, called Sea Fantasy from 1946.

In the next group of paintings, from the late 1940s, blurred patches of color obliterated all sense of figuration, and when I looked closely, it seemed that perhaps he had painted the simple shapes over a more complex composition or drawing. could see bits of line peeking through. So the top layer seemed a very clear attempt to simplify and unify what lay beneath. 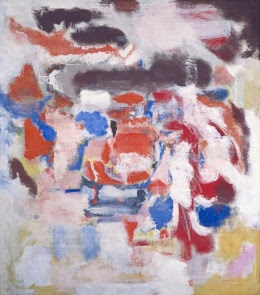 From these paintings of broken color fields, the transition toward stacked, simple rectangles evolved in the last years of the decade. Toward the end of the exhibit were several examples of the glowing rectangles of color for which he is well known. There were two especially fine examples--more complex, deep and rich in color than many others I’ve seen. (I have to admit that I sometimes find his late work rather thin and flat.) In these paintings the edges of the forms shimmered with evidence of what lay beneath, and they breathed quietly in the way that I enjoy in the best of his work. 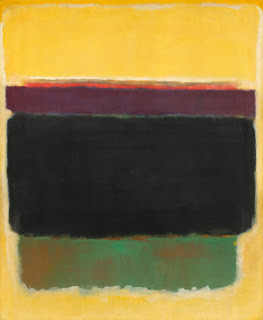 Paintings by other artists of the time hung in the final room, and seeing these took me back to an exhibit I saw at the Walker Art Center in Minneapolis in the mid-80s, of the early works of the Abstract Expressionists--called The Interpretive Link. I've been intrigued ever since by the ways this group of artists moved through abstract surrealist figures and landscapes into the formalized, distinctive styles with which they were known in the 50s. The Interpretive Link exhibit featured works on paper by many of the big names, Pollock, deKooning, Motherwell and Rothko among them.

The exhibit at the Walker made such an impression on me because at the time, I was just starting my own journey into abstraction, and concerned with finding my authentic voice. In fact, the work I had just completed during my graduate studies was similar in content to the surreal abstraction of the show. It was emotional, raw work, full of odd creatures, body parts, and spacial illusions, such as this painting from 1984, Desert Forms. 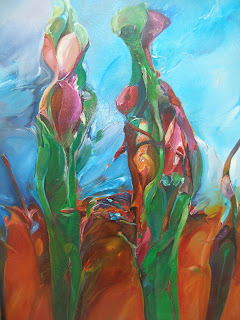 It was fascinating for me to see how others had gone down this path, and to know that they did so guided by their respect for intuition and the subconscious. The work in the exhibit was intense, personal, multi-layered and complex. There was nothing easy or facile about it, and this was intimidating as well as inspiring to me as a young artist.

I think of these exhibits now in light of the workshops I teach, and the desire of so many artists to understand and explore abstraction. It seems to me that finding one’s authentic path in abstraction may require a period of soul searching in the studio, a dig into the subconscious where all is not pleasing and comprehensible. A period of creating work that has nothing to do with the art market or pleasing others. From these murky places in the mind, unique, powerful abstraction can evolve. It is not the only path, I'm sure, but for those who struggle to find an abstract voice, I believe it is one worth considering.   ¶ 10:59 AM 2 comments