Thursday, August 25, 2016
learning in series Last week, in my advanced abstraction workshop in Gloucester, MA, we had a group discussion about working in series. About half the artists in the class regularly work in series, and the others all were interested in exploring the idea. As various people described their work in series, it was obvious that the word has no single definition.  Series can be anything from very intentional and planned in terms of concept and format, to an after-the-fact grouping of similar work, to something in between, such as what results from coming back to a specific idea over time. An artist's motivation to create a series can also range widely, and include wanting to master a particular technique, play intuitively with variations on a theme, or follow a conceptual agenda. But in all of this diversity, there is commonality. Working in series is basically a practice of revisiting and exploring a visual idea in depth--and a good way to recognize and follow our personal direction as artists.

Because my work is very influenced by places that I've traveled and stayed, most of what I designate as series are groupings of paintings that have come out of such experiences. There are also series that I define because of similar technique or format. My series tend to be ongoing, and once I recognize them, they become ways of thinking about a developing piece, a guiding idea as I work. They are helpful to my intuitive process; they keep me on track, provide ideas, and show me what is worth pursuing and developing further. My series tend to evolve organically through my process, rather than being preconceived. (Below, a painting from my ongoing Llano Series, from my time in New Mexico this past winter; Llano #2, 36"x30" oil/mixed media on panel.) 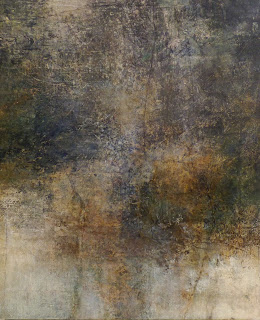 Recently though, I had an idea that required me to work in an intentional series. This was because I did not imagine it as just one work, but as filling a wall. It's funny now to think that at first, I presumed that having had a compelling idea, I would simply do the work and have good results...voila! And that might have happened (more or less) if the idea had involved just painting, But it included printmaking also, and some techniques that were new to me. My idea was to merge print media and oil paint (mixed with cold wax medium) in the same image, creating a dynamic interaction between the two. What ensued was a process of trial and error, working out technical and conceptual challenges, and adjusting my ideas for the outcome. It turned out to be a far more interesting exploration than I had imagined.

I'm sure the amount of learning and experimenting that took place would not be a surprise at all to artists who are used to setting clear challenges for themselves and working in preconceived series. But for me, this was new. I did work this way as a beginner, but my approach for many years has been based in intuitive process. For others like me or who may be curious, here's a run through of how the series evolved, and is still evolving:

My original idea was to apply select areas of oil paint on top of monotypes. I am practiced at making monotypes on my etching press, so I felt confident about that part. I decided on a 12"x12" square format, printing on Arches Oil paper, which would allow me to work over the print with oil paint.  The first day, as I made a number of monotypes, I began to question my idea more closely. I didn't want the prints to be merely a base layer for the paint, instead I wanted them to interact with the paint, and offer their own special qualities to the final image. To that end, I made some strong dark marks, and some of the textural effects that are unique to monotype. I set them aside to dry, and the next day approached them with my oils. The only one that I liked after painting over all of the prints was the one below. It wasn't really what I had in mind, though. What you see here is only a thin layer of transparent orange paint over the monotype. The character of the oil and cold wax was not exploited. 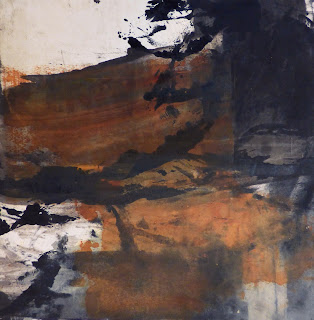 On the others that I attempted, the paint overpowered the print. I considered running them back through the press with a new printed image on top, but everything was too wet then, so I set them aside. By the next day I had a new plan. (I'm holding onto the idea of multiple runs through the press, alternating painting and printing, though...a spin off series perhaps.)

My new idea was to begin with a carborundum print. In this technique, you adhere a fine grit (carborundum, available from printmaking suppliers) to a plate, and that plate is inked and printed using the etching press. Because the carborundum itself is textural, the ink catches in it in a different way than on a smooth plate, and the result is characteristically rich, deep in color, and somewhat textured where the grit imprints on the paper. I figured this type of strong and textural print would stand up better to the paint.

My next step was to figure out the basics of  carborundum printing, because I had never done it before. I did have some carborundum on hand, which I had bought a while ago with the idea of experimenting at some point. The time had come, and I spent the next few studio sessions experimenting, learning how to make textures that I liked, and how to ink and print the plates. This in itself was fascinating. I didn't have any instruction other than a short YouTube video so it was all an adventure. Here is my most successful straight carborundum print: 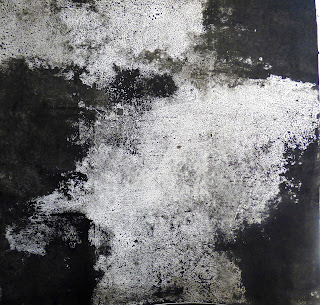 Once I felt I had a handle on the printing process (or at least some basic ideas) I began to work over some of them with oil and cold wax. It turned out that I was right in thinking that the carborundum prints would come through in a stronger and more defined way than the monotypes had. I was able to paint freely in some places, and in other areas allow the print to dominate. Below is one of the pieces that I'm happy with. I love the way the carborundum produces such deep blacks, and the textural effects that are unique to this process interact with the special look of cold wax and oil. This piece began with the same plate (upside down) as the print above: 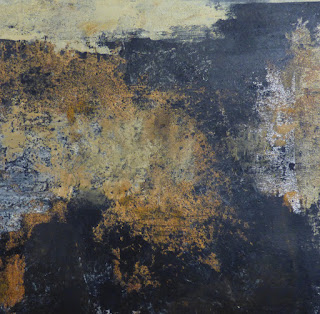 Today I explored further, feeling more free, playing areas of fairly thick paint off against the more delicate print areas. I'm enjoying the way that this series is opening up some new territory for me. Now I want to know more about carborundum printing, and to keep exploring this intriguing conversation between print and paint.

PS: You can click on any of the photos to see the pieces in more detail. 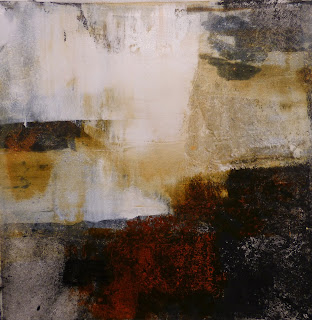