I’ve been at our new winter home in New Mexico for several weeks now, and the beauty of this place, the friendliness of this small community, the cultural opportunities and connections with other artists are all amazing and gratifying. I’ve been painting a lot and taking long walks, reading, and writing. In spite of the distractions of the remodeling the old adobe here, and the need to figure out aspects of daily life in a new place, there are lots of quiet, contemplative moments that ground me in this new reality. 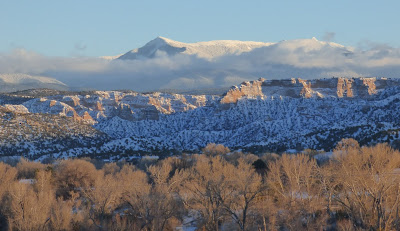 The angular forms and rocky textures of the dramatic landscape here are entering my work, and recent snowfall suggested stark value contrasts. I’ve been working mostly on paper, as I await delivery of some larger panels. 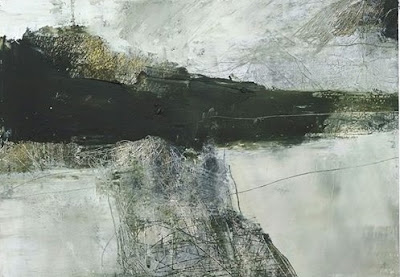 I’ve started a small personal research project on the side—looking closer at the time of my life (in the late 90s and early 2000s) when I made the transition to abstraction in my work. I remember so little of this, and wonder if understanding it better would be helpful, not only or my own reasons but because I’m sometimes called upon to talk about my work chronologically, and this period represents a major shift. Also, toward the end of this time, in late 2001 or early 2002, I first started using cold wax medium. I know that for years I regarded it simply as a painting medium and not much more, though I was no doubt figuring out some of its unique properties from the beginning.

For this project, I’ve brought to New Mexico some of my old writings and journals. (I wish I’d also brought sketchbooks from the time; they may have been where I wrote about cold wax, if I did at all.)  I decided to just dig into these writings with no real plan. This morning I began with a journal that I wrote from August of 2002 through the June 2003. Interesting that the first one I picked up covers a significant time in terms of finding my voice in abstraction.

Early in the journal I mention a friend’s remark that my previous focus on realistic landscape seemed to have been a search for meaningful content. He said that “my challenge now was to take the substance of that work into new territory.” I found this insight helpful, a connecting thread to my earlier work. It helped me to clarify that my intention was to express the essence of landscape outside of a traditional landscape format. I had, at that point, done some landscape work that edged into abstraction by eliminating the horizon line, but felt I wanted to be less literal. 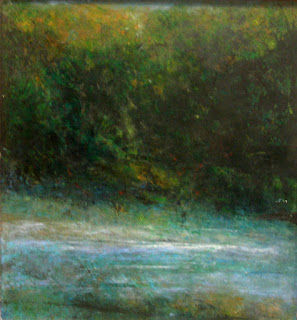 The following spring, I wrote a rather impassioned defense of abstraction after a discussion with a realist painter: “In abstraction you put yourself more on the line, because many people will think your work has no meaning. I think it is harder, more conceptual, and more personal…I will probably always have more admiration and appreciation for good abstraction than for good realism.” In retrospect (since nowadays I am not so biased) I can see that I was staking out my new territory and finding it a bit risky. I also had a rather polarized view of the differences between abstraction and realism, not seeing the crossover qualities or possibilities. For example, I was not sure at the time that “real” abstraction could refer to landscape or other aspects of the visual world.

An entry near the end of the journal, from June 2003, connects spirituality with abstraction, the idea of keeping open a clear channel and not interfering with negative or ego-centered thoughts. I noted that this gave me a sense of power and of “a force beyond my own conscious direction.” This was a very liberating insight, written after making my first large-scale abstract painting, a grid of textural color fields called 25 Views of Landscape. I can now see that this piece was a milestone for me, a synthesizing of various ideas about abstracting from landscape that had been brewing, yet very intuitively realized. At the time, I simply felt relieved-- happy with my work for the first time in a year or more. 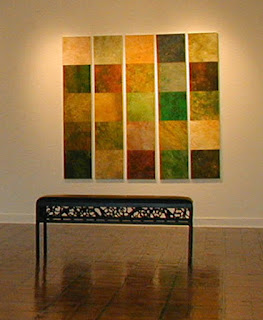 This particular year-long journal, though, is dominated not by notes on process and studio practice, but by thoughts and experiences that are rather painful now to read. Although it the journal ends well, on the above note, it was a time of set-backs in my work and art career along with other more personal challenges. I share some of these in hopes that they will reassure others going through similar struggles.

Looking back, I’m very grateful for all the positive changes that came afterward, that unfolded in their own time. But in the midst of challenging situations, it’s impossible to know what positive changes we may already have set in motion through our hard work and focus.

The summer of 2002, I wrote about a solo exhibit in Minneapolis in which nothing sold, and about a special preview meant to showcase my work for architects and designers, during which there was much more interest in the wine and cheese than in my work. The lonely, devastated feeling of standing by myself in the main gallery while the party went on by the refreshment table in the next room haunted me for a long time. (Looking back, I wonder why I didn’t try to take charge of the situation, go over to the table and mingle, but I was pretty insecure in those days.) I wrote depressingly in August of 2002:  “When I look ahead I see nothing uplifting…my art career, which seemed a while ago to be on an upward climb and full of promise, now is dead. Those good years (before 2001) now seem like a fluke. Everything I gained then has been lost.”

My concern with sales was not unfounded-- I had sold very little that year to date. The economy was bad, following 9/11, and although I knew this was a widespread situation I felt anxious and envious over other artists’ sales. That summer, I had been working on one large painting for 6 months without being able to resolve it. I described it as a “monster in the room,” after I had studio visitors who ignored it completely. I felt stalled, blocked, and I had to push myself to work at all. The abstract voice I longed to discover was still elusive in the early part of the journal. I was in transition in my work toward something really good, but a transition can feel a lot like a dead end when you ae in its midst.

In my personal life at the time, my sons were young teenagers. While I wrote a lot about how much I enjoyed and appreciated them, parenthood was also at times draining and time-consuming. My aging mother was experiencing an early stage of dementia and increasing anxiety, and depended me for emotional and practical support. I was going through some health issues of mine own that seemed to have no resolution. I’ll spare you the details, but it’s clear to me now how overwhelmed I was—so many people’s needs to meet besides my own, while feeling depressed about my work and career.

Thankfully, there were also positive and insightful passages in my writing. I wrote that my challenging situation made me look inward for the intrinsic rewards of painting, rather than outward for financial success or recognition. “My intuitive sense is that for now, my focus needs to be on the work, and letting some calm trust in the business outcome operate without giving the topic too much of my attention. I have to steer clear of a sense of personal failure…if I look ahead and see ‘no success’ I’m thinking about the wrong stuff… I need to think only about the paintings themselves. I do feel I am on the verge of some breakthrough, coming closer all the time, finding new aspects of abstract language. There is some elusive image in my head, hovering almost like a mirage that keeps me going.”

Parts of this still ring true for me, in spite of the successes I’ve enjoyed in my art career. I’m glad that I no longer feel threatened by a fear of failure, but I can still fall into the trap of leaning too much on extrinsic rewards such as sales and recognition. As artists we have so many lessons to learn, and even when we think we have something figured out, back it comes in some new guise. But with each round of confronting our issues, I believe we do make permanent gains.

It strikes me in all of this how connected are our lives and our art. Just the one journal I’ve read contains a personal art journey with far more twists and turns than I remembered. I plan to keep reading and contemplating, and if other insights emerge, I’ll share. So much of what we struggle with as artists is universal, and we all have stories that in sharing, can offer solace or encouragement to one another.
¶ 6:29 PM 13 comments