Sunday, May 09, 2021
pandemic sketchbooks As we begin to emerge from the heaviest pandemic restrictions I'm reflecting on a ritual I began in the studio almost a year ago--each day making a quick image in a sketchbook. Over time I've accumulated nine volumes of mixed media drawings as a result of this practice. This is a drawing from June 2020, near the start of this practice: 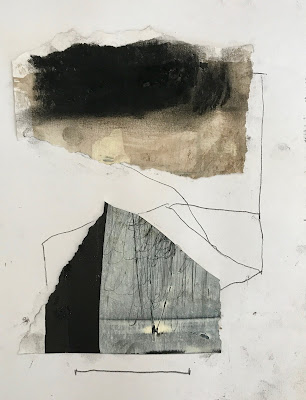 I began keeping these sketchbooks without a real plan or intention that I would do a drawing each day, and so at first the entries were more sporadic. They were simply a way to discharge some emotion at the start of a painting session and to settle into the day's other work. I'd never had specific studio rituals in the past so I was not inclined to think of them in that way, although after several months creating these pages did become my habit. 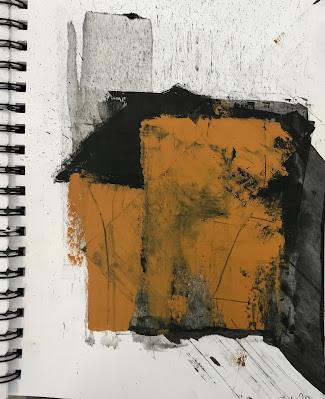 At the time, I began the sketchbooks, I was also doing many other, larger works on paper as a large component of my studio time, and appreciating the immediacy of that expression. So, it seemed natural to do start these smaller ones as well. Channeling some of my fluctuating emotions of last summer into this quick and intuitive work was calming and satisfying. Later, when most of my focus shifted back to paintings on panel, I continued the sketchbooks and they evolved into the daily ritual that they are now., I even take my sketchbook and materials along if I am away from the studio for a day. Thus one is from November 2020: 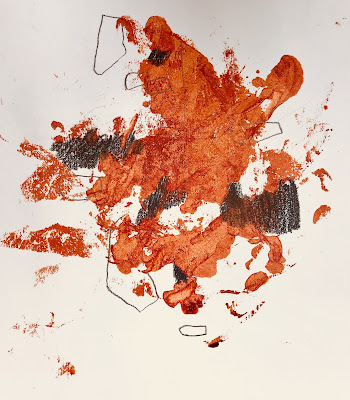 It is natural to look for symbolism connected to pandemic issues in these images, and I sometimes see it. All of the images are done intuitively, with no pre-planning, and as such have reflected my states of mind. For example, a recurring theme is geometric, orderly lines or shapes drawn over a more loose or chaotic background as in these two from early winter: 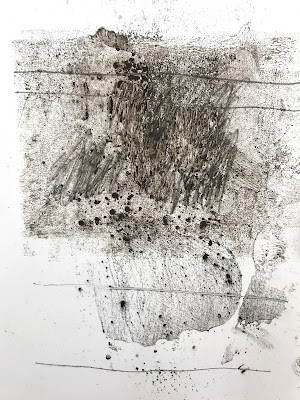 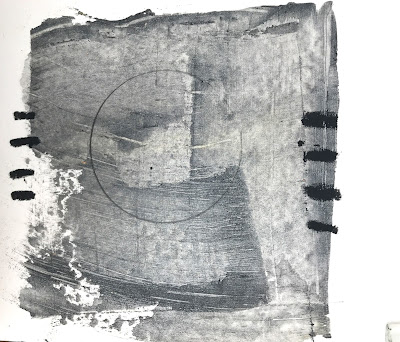 Another recurring motif is small marks that suggest footsteps, rocks, or places where I pause when out walking, an activity that has brought peace in the midst of the anxieties of the past year. These often travel across an image with a sense of movement, as in this page from December 2020: 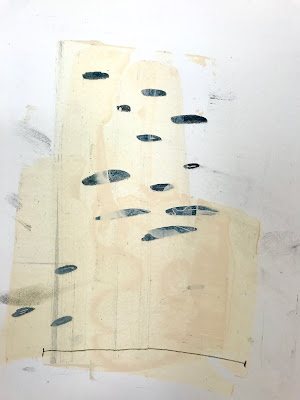 The sketchbook images also include references to the New Mexico landscape with its canyons and rock faces, which has been my refuge in the past year and more. Although I've gotten away from obvious landscape imagery in my paintings, I am free with referential imagery when it comes through in my sketchbooks: 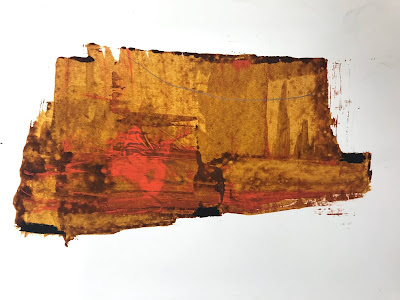 The process I use in all of these is simple and direct, using a variety of water-based and drawing media and tools. I have a dedicated place in the studio where I keep my materials in a typically messy array (it was cleaned up quite a bit for this photo): 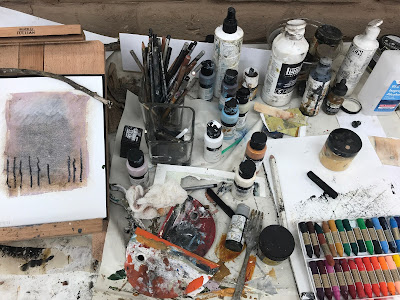 Does this daily practice feed into my larger paintings in oil and cold wax? I believe so, although not in a very direct way due to the differences in media and attitude. I think of the sketchbook drawings as important to me in their own right, personal and intimate like a journal can be. That said, I sometimes think about publishing a selection as a small book to share them with a wider audience--a project for some time in the future. For now, they continue to engage me and ground me every day, even as life begins to open up post-pandemic, and I wonder how they will continue to evolve in the future.