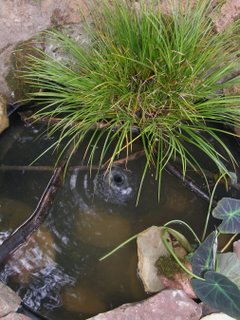 This photo shows my latest work, a small water garden in my front yard. It's a lovely little place of water, plants and rock into which several frogs have moved and the movement of water makes rippling shadows. I'm going to add water lilies and a couple of goldfish, and have plans to expand the rocks and plants surrounding it. Is spending time on this project just a hobby, a diversion from painting and my "real" work, or is there something more going on?

This morning I'm starting to understand why the urge to make a water garden has been a minor obsession of mine for the past few years. In doing so I find myself thinking about certain aspects of the life of Carl Jung, as described in his memoir, Memories, Dreams and Reflections--a book that I read with intensity over 25 years ago. Near the end of his life Jung was driven to build a home (consisting of several towers, an inner meditation room and an outer courtyard) as well as to make several sculptures for the grounds. This project was all directed by strong inner voices that he followed. Only when the house was done did he come to realize the various symbolic, archetypal implications of his creation, which went far beyond those of a practical structure to live in. I've always loved that story--the way it speaks to trusting one's creative urges and that greater meaning will be revealed over time.

Anyway--sometime last night I woke up with the impression that I'd been dreaming about my grandmother's garden. This garden rambled beside the small house in which she lived on Cape Cod. In the garden was a round pool we called the "fish pond," the edges of which were all beautifully overgrown with iris and other flowers. An island in its center was a further tangle of lush growth. Huge bullfrogs lived in the pond, as well as koi, turtles, water bugs and other small aquatic creatures. At one end of the pond was a bench between the pillars of a stone arch.

For me as a child, the garden was more than just a place to play...it held mystery and magic. This place--the pond, the old stone arch and bench, and the house have been among the strongest images retained from my childhood. They exist not only as visual impressions but as smells, sounds, touches, atmospheres and emotions. And since my grandmother seemed impossibly old even then (she lived well into her 90s)I could sense things ancient, enduring and spiritual all around this place.

Although there might seem to be an obvious connection between these memories and my present desire for a water garden, no such thing was conscious to me at all until this morning, following my dream. Not once in the time when I was wishing for a water garden, nor when I was finally buying supplies, planning and digging, did my grandmother's pond come to mind. And in truth, my water garden is much smaller and rougher than my grandmother's...there isn't much resemblance other than its round shape (I was very sure when buying the plastic liner that, despite many other options available, round was the "right" shape.) But once my dreaming mind made the connection between the two, I understood what the garden means to me and why I felt compelled to make it.

And actually this also has something to do with art, I think. In a long email discussion this past week with the painter Anthony Falcetta, we talked about how meaning in art is often something that one discerns in the aftermath. That setting out with a consciously defined story or idea may stand in the way of deepest expression. The unconscious mind knows so much, and if allowed free reign it may come through in a painting or a body of work--revealing something that is hidden and unexpected. Often this happens best when viewed at a distance of time and perspective.

The water garden story seems to me to reinforce that message to trust in the creative process, to follow urges and ideas in art and life. We don't need the meaning defined ahead of time...and the "rightness" of what results can have pull and power beyond immediate knowing.  ¶ 3:14 AM