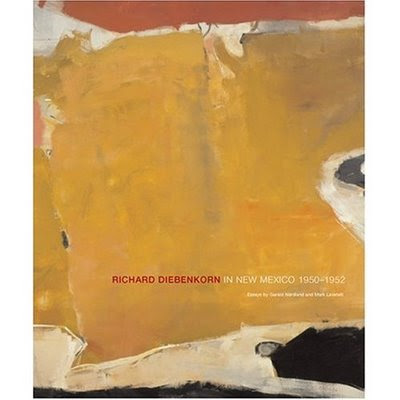 I've been studying the paintings in this book, Richard Diebenkorn in New Mexico and paying special attention to his use of line, because for the past year or so I've become more conscious of this element in my own work. In Diebenkorn's paintings I appreciate the interaction between his quirky, meandering lines--that seem oddly descriptive, yet not specific to anything I could name--and the fields or blocks of color on which they often ride. The lines clearly dominate in certain paintings, but are supported by the underlying color in a way that energizes both. (The painting on the cover, shown here, is unfortunately not an example of what I'm talking about...)

In my own work, I tend to push back my linear elements, to keep them subtle. Yet I've also done paintings in which they make a strong statement, and some of these are among my favorites. So I find myself becoming more interested in the expressive potential of abstract lines, and wondering where this will take me.

I seem to have the most interesting results with indirect techniques. For example, I like to draw with the edges of squeegees and pieces of cardboard, or transfer charcoal lines drawn on paper by rubbing over the back side with a brayer, or draw with my non-dominant (left) hand. It seems that if I am one step removed from drawing a direct line with a conventional brush or paint stick, if I have given up a small amount of control, the results have more character and energy. I think this is because when I draw directly and deliberately with my right hand, years of academic training immediately kick in. In some cases, this is exactly what I want, and that works fine. Other times, I feel a loss of fluidity and too much dictation from my brain.

As a student, I was intrigued by something called "ant drawings" in which you did not look at your drawing at all, but instead followed along the contour of some object with your eyes, crawling slowly like an ant, noting every nuance. When you did look at the drawing you'd made (your hand moving along with your eyes) it might look nothing like the actual object, but was clearly an intense and detailed response, and showed the interaction between brain and hand when there was no critical, analytical interference. It seems to me there is certainly a place for that kind of thinking as I draw, but there is also a need sometimes to override it or subvert it. To request a less controlled place in my art brain to step in and play a part. (I do that with paint all the time, actually--my techniques are almost always a blend of spontaneity and control--but for whatever reason, drawing has tended to be stuck in a stodgier role...)  ¶ 11:44 AM