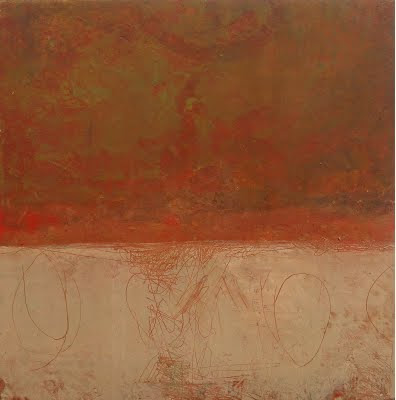 I've spent most of my studio time this weekend on small pieces for several upcoming shows--I have about a dozen 12"x12" or smaller paintings that are either done or in progress. Some are for Darnell Fine Art in Santa Fe where a group show of small work will be hanging from mid-November through the holidays. I'm also sending some to KC Willis in Longmont,Colorado, in order to familiarize people in her area with my work (I have a workshop scheduled there in April--scroll down the linked page for information.) And there are several shows in January and February for which some small work will come in handy.

My small paintings are generally done on a single panel, and I often create some sort of horizontal or vertical division that serves the same function as the juxtaposed panels in my larger, multiple panel work. The painted divisions are less defined than the "seams" between panels--I like to play around with lines and smudges that cross over and blur the edge. This has led recently to some similar effects in the larger work, lines and colors that cross over between panels. I really like how one group of work can influence another--a good reason to keep several series or ways of working going at the same time.

Comments:
I love the scratches and marks. What a lovely gift this one would make.