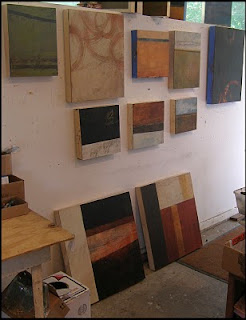 Activities in the studio for the past few weeks: sorting, stacking, configuring, packing, getting ready to ship, and painting, painting, painting. With several shows coming up and a busy summer/fall of travel and workshops looming, I'm trying to sort out the business end of things. I want to get a handle on which paintings are for upcoming exhibits, which can be sent out now, which should be earmarked for this gallery or that. So I make lists and piles, but so far only a few firm decisions, and this is all kind of stressful. I certainly don't hate the business part of what I do, in fact I've learned to like it for the most part...but unlike painting, it often lacks a certain satisfying flow.

I'm always happier thinking about the work for its own sake, rather than where it will end up. And right now, there's a lot of diversity in my work that is interesting to me. For example, at the same time that I've been allowing some fairly recognizable imagery (mostly botanical) into my work, I'm also painting some of my most purely abstract paintings yet--simple color fields with solvent marks and scratches. I also have paintings going that feature primarily soft, atmospheric color fields as well as paintings with very bold contrast in both color/value and geometric division. I'm really enjoying the way these various paths are diverging and intersecting. It seems like a time of transition, but fortunately not the awkward kind--instead, various directions and impulses are feeding off one another and occasionally working all together in one composition.

Just to add to the mix--at the same time that I'm exploring a horizontal format in some paintings, I have resurrected the Vertical (or Column) Series which has been dormant for the past year or two. I painted a lot of these up until about 2008, then moved away from them--but am now seeing new possibilities, incorporating some of the techniques I've been working on with lines and interior divisions within the panels. Both formats, the emphatically horizontal and vertical, are older ideas that now seem fresh again.

One of the benefits of writing/blogging is that it often brings clarity to an issue. OK, now I see it--no wonder I'm feeling confused about galleries and shows and whatnot. There is so much unfolding right now in the work itself that I must need to turn off the art biz brain and just paint. Let's see if "trust in the process"-that great mantra--can apply to the whole picture--not just the art itself but the art business too. I expect that things will fall into place if I quit insisting that they have to do so right now!

The photos above and below are a couple of studio shots that may provide a glimpse into what I'm talking about, though at the distance they are taken, much is lost. I include them mainly to get a sense of my environment, of things placed around, under consideration. 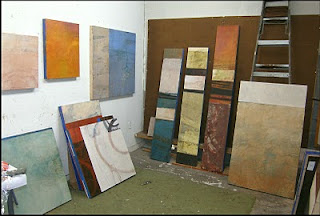 Comments:
Rebecca,
This post of yours has been a great help to me. Not feeling very well, I didn't paint today, but did go out to the studio. I looked at all the pieces on the wall, and the variety among them, and the unfinished-ness of the whole thing, and despaired of my whole little project. I knew that it was partly feeling ill causing such doubts, but still.... The shots of your studio and your work, and your expressed willingness to have unfinished pieces around, and the variety that I can see that you deal with -- well, all I can say is that I felt comforted. Not so alone, at least! So, thanks.

Hi Nancy--that makes me happy, and thanks for the comment. I remember reading once that artists need to have a high tolerance for ambiguity and uncertainty. I guess it either comes naturally or must be learned over time, in which case there are bound to be some stressful times. I know it is something I continue to find challenging.

Love the peeks into your studio. I see so much beauty in there!