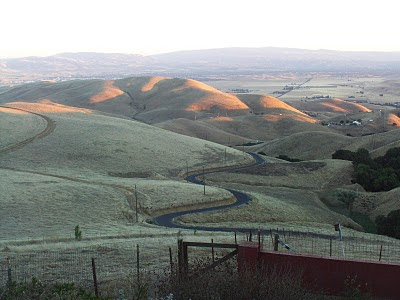 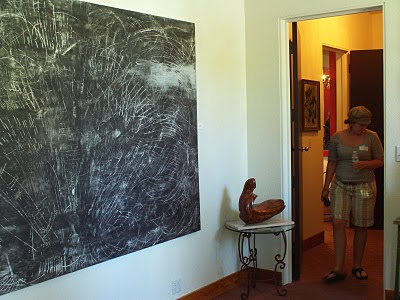 I'm flipping through all the photos I've taken since arriving in the Bay Area and trying to pick out just a few to represent what I've been up to. But although photos and people and places are great, most of the experience has been internal and I have only just begun to digest it all.

The top photo shows the expansive view from the home of an artist friend near Livermore where I am staying for a short time before heading to New Mexico tomorrow. We arrived yesterday with a third friend, taking BART from San Francisco, where the IEA (International Encaustic Artists) Advance took place. It has been an appreciated opportunity to rest, relax and repack (my suitcase blew out all its zippers, necessitating a shopping trip...maybe I packed too much?) All three of us are still pretty worn out from the conference-- two intense days of talks and networking, and a final day (yesterday) spent touring several artist's studios. I'll be writing more about the IEA Advance itself, I think, in a future post, but for now I'll just say that I'm very glad to have attended.

We wound up yesterday at an art collector's estate north of the city, where the middle photo was taken. Imagine a large home with every room absolutely filled with an eclectic display of art--so much art that the owners do not even live in the space--it is exclusively a display area, and they were generous enough to allow us to wander through after a nice catered lunch outside under the trees. The painting in the photo was one of my favorites, by Korean artist Hyesook Park.

The photo below represents a sharp turn away from the gorgeous and refined...my friend in Palo Alto threw a party the second night I was in California for the express purpose of making Bad Art. Choosing materials from an enticing array of neon colored poster board, styrofoam, glitter, puffy paint, dyed feathers, old cardboard, fake plants, all sorts of little 3-d objects, and a more traditional selection of paints and drawing tools, we dove into several hours of creating stuff we'd never think of making in our normal "serious" studios. Would you believe I made a big-eyed kitten out of foam, surrounded by garish feathers in a styrofoam frame? It's true. It was the most fun I've had at a party in a long time. We ended the evening with a critique session, exploiting every art jargon term we could, while at times giving over to honest admiration for what had been created. Everything was done in clashing or muddy colors, cliched and poorly executed--yet all of it was spontaneous, playful and humorous.

After weeks of long studio days finishing work for my two upcoming exhibits--hours and hours spent refining, reworking and evaluating, this party came at the perfect time. Tomorrow I'll be leaving the Bay Area to follow up on those efforts, with an opening at Darnell Fine Art in Santa Fe on October 1, and one at Telluride Gallery of Fine Art in Telluride, CO on October 7th. Shawna Moore and I will be teaching Hot Wax/Cold Wax Workshops at both locations as well...busy days ahead. 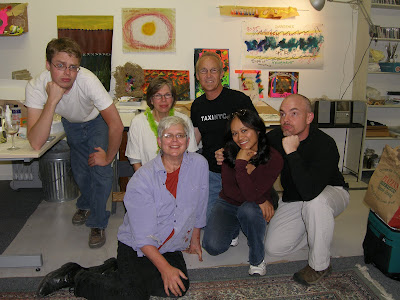 Comments:
California is a magical place. I love the Hyesook Park painting too! Thanks for sharing it.

Rebecca--I appreciate the way in which you described your journey to the Bay Area. Those beautiful rolling hills juxtaposed against the written image of kitty con glitter. So CA. I spoke to a friend last week who was going to attend the conference and I look forward to hearing/reading both of your reflections. All the best for New Mexico.

I too love that black and white piece--amazing.
How is it possible to own a house filled with art that one can't even live in it?
I love the bad art making--sounds like it would be such a nice psychological reprieve from the way we all take it so seriously all the time. What will you do with your bad art piece?

P.S. Unbeknownst to me, perhaps I was channeling that Korean artist when I did my Sept.10 painting! (Sept.10 post on my blog)

That top photo of the hills took my breath away. The hope and promise of a better tomorrow and all the dreams encumbered. Love the photo!
It sounds like you are following your dream.