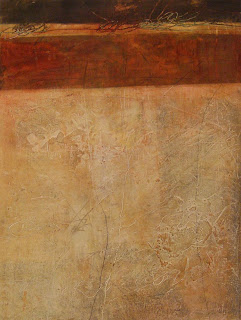 It's the season for looking back at the past year, and while I will spare you a detailed month by month recap of my 2011, there is one career milestone that I think is worth mentioning. For me, 2011 was a remarkable year for connecting with people and places in other countries--the year that my work first crossed international borders in the context of galleries and sales.

It started last February when I signed on with an agent in Ireland who works to promote my work in Ireland and the UK; also in February I was accepted into Gallery 133 in Toronto, and a month later I drove five large paintings across the border into Canada. Later in March, an artist from Sweden came to one of my studio workshops, and although she was not the first person from another country to attend one of my classes--I've had several students from Canada, and one from Brazil--she was the first to cross the Atlantic for that sole purpose. In April I learned from my agent that I would be showing in Dublin at the tail end of my autumn artist residency at the Tyrone Guthrie Centre in County Monaghan. In September, while I was in Ireland, a collector in Austria contacted me to purchase a painting from my website. (Fortunately my husband was still at home and could get it packed and shipped.) My exhibit at Gormleys Fine Art in Dublin opened September 30, and sales were decent despite the rather dire economic situation there. Heading into the new year, I will be having a solo exhibit at Gormleys' Belfast gallery in February, and plan to return to Ireland in the fall for another residency.

So it's been an exciting year, and although I've had "pinch me, is this real??" moments, I've also started to see what is possible in reaching beyond our own borders. We live in fortunate times as artists--the internet provides a world context for art, and everything that happened for me outside the US this year can be traced to internet contacts and exposure. An artist can live and work anywhere now--even rural Wisconsin--and be active in a much wider art world.

Comments:
Congratulations, Rebecca! You are developing a world wide presence.

you inspire! happy new year and congrats on the new gallerys

Rebecca What an abundant and art-filled year you've had. May the new year ahead bring you joy and new possibilities in your painting and in your travels.