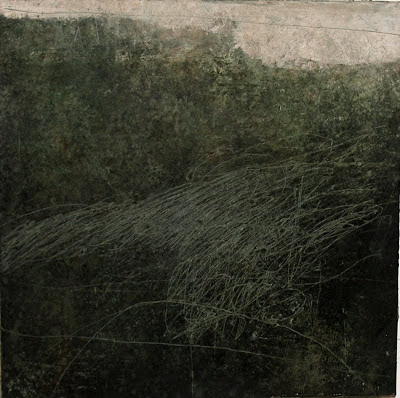 I've been working with memories of the Irish landscape, and the painting above, Iveraugh, 12"x 12" (mixed media on panel) is one of the small pieces I've finished in the past few days. Along with the memory and emotion in the painting, I also have a formal interest in the tension between the color fields and the line drawing, done here in a gestural and energetic way. Lines have been growing more important in my work in the past few years, since 2008 after a residency in the Catalonia region Spain, when I did a lot of sketching in the mountainous landscape. Those sketches translated into a type of sketchy line drawing in the abstract paintings that followed once I was back home, such as the one below, Old Wall Barcelona (oil and mixed media on panel, 2008, collection of Max and Emely McConkey.) 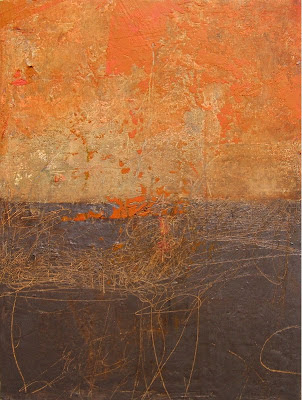 With their direct and simple presence, lines give the viewer a sense of the artist's hand. I like the contrast between this effect and the way that the color fields in my work are perceived. Color fields have an essentially mysterious presence--it is never clear how the complex surface came about, how these particular effects were achieved, oftentimes even to me. The process I use involves building up and tearing down layers of oil paint mixed with cold wax medium along with a few other materials such as powdered pigment, sand and pastel. There are complex interactions between the layers, and in the end there is as much buried as revealed. To then draw freely into the surface with a skewer or palette knife tip is a very different process. I like to think the result evokes different aspects of experience--the deeper, hidden layers and the more spontaneous and overt.

I've also used lines in my work many times in a more structured way, as grids, horizontals and verticals. In my multiple panel paintings the lines formed by adjacent and contrasting panels are strong and geometric, while those I draw into the work are looser and more subtle. The recent (untitled, 30"x30) painting below is criss-crossed by barely perceptible lines drawn with graphite transfer paper and scratches. 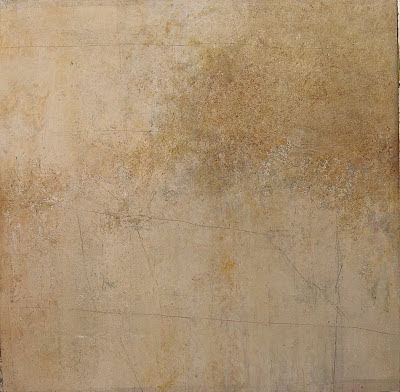 My interest in crossing the picture plane with horizontal and vertical lines has been fed by looking at archaeological site maps, in preparing for my upcoming exhibit at the Pratt Museum in Homer, Alaska (opening August 2, 2013) as well as by observing the beautiful stone fences that cross the farm fields in County Kerry, Ireland, where I recently spend several weeks. It intrigues me how the same imagery can come from many sources, originating in a basic attraction to a simple form or visual idea. 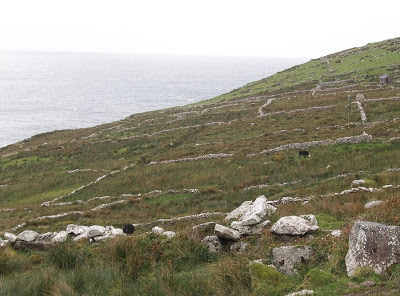 thanks, BDG, and thanks for visiting my blog.