Tomorrow, Fed Ex is picking up eighteen paintings and ten works on paper for Beneath the Surface, my upcoming exhibit at the Pratt Museum in Homer, Alaska. My husband did a genius job of carefully packaging them all into four boxes, but I'll be a little on edge until I know they have arrived safely. 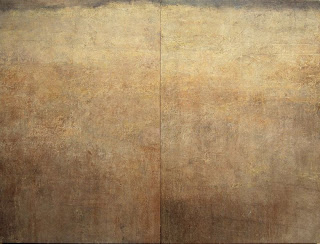 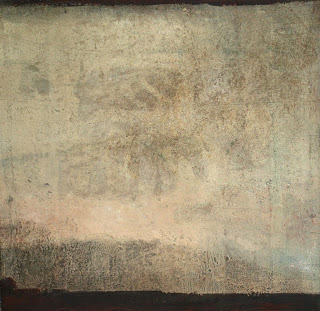 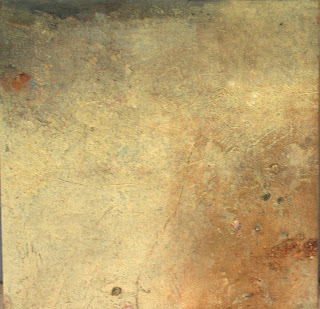 Above, several of the paintings in the show: Geo, 36"x48"; Beneath the Surface #1, 16"x16" and Chalkstone #2, 10"x10", all oil and mixed media on panel. Here is my artist statement for the exhibit, which will include artifacts from the Pratt Museum's collection and a soundtrack of music by my nephew, composer David Crowell, inspired by the area around Homer:

Years ago, I considered a career as an archaeological illustrator—an idea that grew out of a brief stint as a volunteer on a dig in Virginia, where I was fascinated by the artifacts we unearthed--their weathered appearance, their stories and mysteries.

Though my artwork took a very different path over the next forty years--from detailed realism into abstraction—I’m still intrigued by bits of ancient culture that have been buried in the earth. Now, abstraction gives me the visual language to go beyond the physical appearance of the artifacts, and to explore their more poetic meaning—the cycle of burial in geological layers, the survival of cultural objects over time, and their excavation in the present. I am interested in the beauty of ancient surfaces, the mystery of buried objects, the wonder inspired when vestiges of human lives are unearthed after many centuries, the science and knowledge involved in locating and excavating ancient sites, and the endurance of stone, shell, and bone.

My painting process itself has certain connections with the theme of archaeology, with its layering of paint, cold wax medium, and other additives such as powdered pigment and sand. (In a few paintings, I included some ground chalkstone collected in the Kachemak Bay area.) Part of my process is also to expose earlier layers of paint, by digging, scraping and dissolving with solvents. 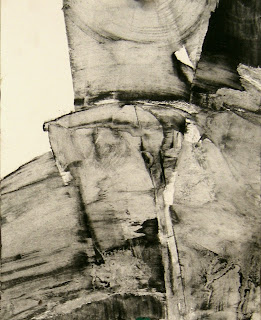 (to the left, one of a series of charcoal drawings on paper that reference the ancient birch bark basket shown in the announcement photo.)

Some of the paintings and drawings in this exhibit refer to particular artifacts (such as the birch basket and the stone lamp.) In these pieces, I wanted to look closely and specifically at these artifacts, to appreciate both their form as beautiful objects, and their function as cultural objects. But most of the paintings express in a more abstract way the processes of archaeology, layers of earth, coastal geography, and the textures of long-buried surfaces. Both approaches were important to me in expressing the theme of the exhibit, and often intermingled as I developed each painting. Studying photos of particular artifacts would lead me into the initial phases of painting, and the initial depictions were then covered over with successive layers of paint, echoing the theme of what is buried beneath the surface. Bits of the earlier layers were then exposed throughout the painting process.

The lines etched or drawn into the surface of many of the paintings refer to the stratigraphic drawings that archaeologists make on site as they excavate, showing where artifacts are found in relation to one another and to the geological strata of the earth. The stratigraphic drawings that I had access to as I worked gave me a sense of direct connection with the archaeologists. Their renderings of rocks, strata and the outlines of objects-- especially the hand drawn versions—carry for me a controlled and scientific, yet very human, sense of excitement and intrigue. I mingled traces of their line drawings with the rough textures and earthy colors that I imagine surrounded them in their work.

A visit to the Pratt Museum ten years ago impressed me with the connections that are cultivated between the current members of ancient tribes and their ancestral objects. This timeless continuity is deeply moving in our present fast-paced and ever-changing world, and I’m honored to exhibit my work alongside artifacts that bridge this gap in time.

Comments:
Congratulations on both having this exhibition and completing all the artwork for it! Wish I could be there as I can just imagine how sensational it would be to see so much of your art hanging together!

I agree that it will be a wonderful exhibit. I am interested in the charcoal drawings as well. The example is very effective. What size is this drawing?

Thanks to both! The charcoal drawing is small 10x8" (I have another that is larger, 18"x18") and us done with powdered charcoal and water on multimedia artboard. A slick surface, I was sort of pushing/pulling the material around with various tools/rags, etc.