As 2019 gets under way, a huge, exciting and long-term project is nearing completion. Cold Wax Medium: A Video Workshop, made in collaboration with my partner at Squeegee Press, Jerry McLaughlin, is in the last stages of editing and revision. Making this video has been our goal ever since our book Cold Wax Medium: Techniques, Concepts & Conversations (Squeegee Press, 2017) was published--it's another major stage in providing the comprehensive information that Jerry and I have been focused on since we began working together four years ago

In the big picture, we view the book, the video, and workshop attendance as unique and yet related opportunities. The book provides a wide base of information including topics we do not ourselves teach and is a hands-on studio reference many have found extremely valuable. In making the video, we acknowledge that artists are often visual learners, so techniques and other information are viewed as live action, as well as reinforced through on-screen text and is also ideal for people who cannot come to a workshop in person. At the same time, we know that neither book nor video can replicate the important interactions offered in a live workshop—so a combination of all three offers the most in-depth information. If this ideal situation is out of range, any of our resources alone will get you going with plenty of information.

Our professionally produced video was over a year in the making and is expected to be well over 5 hours in length. We're proud of its extensive content and quality--and for the latter are very grateful to our Bay Area, California production company, crushpix--with special thanks to its director, David Ronan. Our mission for the video has been to provide all the essential information conveyed in a five-day introductory workshop. We're aiming at a wide audience, including people eager to learn about cold wax for the first time, along with intermediate-stage artists who want a refresher, and experienced artists looking to expand their creative range.

Throughout the video we go into the "why" as well as the "how to" aspects of the process, because it's important for us to convey context and meaning as well as instructions for the techniques. We also want to present everything in a clear and concise manner. Like the book, the video can be viewed start to finish, but is most effectively used with a more holistic approach. Because most of the techniques can be used in any order, there is no one, linear way to view it. The video format allows viewers to skip around, watch sections multiple times, and gain personal understanding of how the various techniques may be put together. 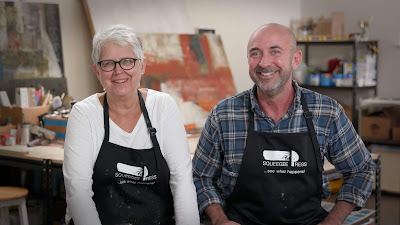 Making the video has been an enormous amount of work--at times overwhelming. But in our years of working together, Jerry and I have built a relationship that is collaborative in all the best ways, and it's essential to accomplishing what we do. I love it that we work together without drama or ego demands--in spite of (or because of?) our very different personalities. After overhearing some of our online chat about the video, my husband said he appreciated that that we're able to operate with easy-going give and take and lots of good humor--but that we also freely disagree with no hard feelings. I'm so grateful to work with a person of Jerry's caliber--without his wide-ranging knowledge, intelligence, energy, focus, persistence, business skills, and friendship—none of this, neither the book nor the video (nor the tools, nor our ongoing plans) would be a reality. It’s been an amazing journey together so far, and things look bright for the future as well.

My own role in what we do goes back a number of years--seventeen to be precise, to the winter of 2001-2002, when I bought a small container of cold wax on impulse and started playing around with it. In those days of grindingly slow dial-up, I didn't use the computer much, and there was little information to be found anyway. I knew that the wax was a painting medium, but that was about it. I now know that artists had been using it for years primarily for its impasto effects--the body it adds to the paint--and to create a matte finish. Working on my own, though, my approach was original, without reference to what others had done. As the result of experimentation and trial and error--spurred on by satisfying results--the techniques I developed in those early years are the basic ones that are now so widespread in the cold wax community. 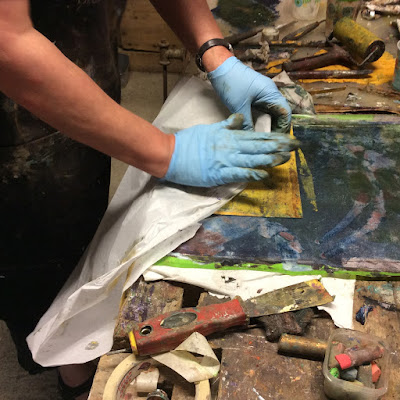 In working with cold wax, I learned its potential for layering, for the kinds of textures possible, and that solvents and scraping tools could selectively access the underlying layers. The color and textural effects that started to emerge in my work were very intriguing. At the time, my work was transitioning into abstraction from more realistic landscape painting, and cold wax opened up new ideas for this change. Instead of rendering organic textures, as I had been doing with straight oil paint, they now appeared as part of the process and had much more depth and authenticity.

My memories of developing these techniques is hazy. How did I decide to try using a windshield squeegee to move around the wax and paint mixture? When did I first start playing with my old printmaking brayers on the painting surface? I only know that my ideas built up slowly, and that for a while, I collected a lot of tools, texture making materials, and other objects to see what I could do with them. I remember that once I tried to make a large, spongy soft brayer out of a dowel and a piece of a styrofoam pool noodle (this was not a huge success). I also remember accidentally spilling solvent on a semi-dry surface and being excited at how this exposed underlying layers--and then learning, gradually, how to repeat this process in a deliberate and more controlled way. Over the next seven or eight years, these experiments and explorations continued. At some point, I started keeping a few notes, and from there Iwrote an article for Dorlands (the first brand of cold wax that I used) at their request. As other artists became curious about what I was doing, I launched two websites to share my information, and in 2009, I began teaching workshops about the basic approaches I had so far developed. There were not many of these at that point and I wondered how I would fill the time in my first 2-day class.

Over the next few years of teaching, I kept learning and developing new ideas. My students would often say that I should write a book about my techniques, but I had no real interest or spare time for that. Then Jerry came into the picture, a complete stranger who asked me to collaborate with him on a book. The story of the book is one we've told many times--how I resisted at first and how he won me over with his vision, his skills and insights and detailed plans. Together we learned about how to give and take, define and refine, and keep each other going when things got hard. We were also energized throughout the process by the intense, growing interest in the project from other artists ...a very large and supportive community for which we were--and still are--very grateful.

With the book in its second printing in 2017, we began to think and plan seriously for the video; once we began, it took over a year to outline and write the script (70,000 words), hire a production company, figure out the materials needed, what we needed for each demo or informational segment--and lots of other boring but important behind-the-scene details. We wanted to be totally prepared when the film crew arrived--but of course, it was all new to us, so some things had to be worked out on the spot. Filming took place over five very long days in May and August of 2018—the August session was added after our originally scheduled three days was not enough for all that we wanted to include.

The night before we started filming I dreamed I had a major role in a play--it was opening night, but there had not been even one rehearsal. Added to that, it was some sort of period drama, and I could not find my costume, and I was very anxious. Then a voice from someone in the dream said "Just wear your own clothes." I woke up with my heart pounding, but those words were comforting. To me they meant "just be yourself" and allowed me to relax just a little about the whole issue of being on camera. Filming was nerve-wracking at first, but it became easier with practice. Watching the crew at work was intriguing, and the whole process gave me a new respect for actual actors. On the downside, the process could be surprisingly tedious. We really appreciated our crew's attention to detail and the need to get everything just right, but sometimes it was hard to be patient. We often needed to repeat actions to get the proper focus, do re-takes of the script, pause while lights were adjusted, and figure out the best setting or angle for a shot.

Once we finished with filming, the task of putting it all together was left to Crushpix along with our input and suggestions. We have been awed by David Ronan's ability to shape the many different segments into a cohesive whole, working in an intuitive, insightful, and innovative manner--especially considering that the material was completely unfamiliar to him going in. Our own work in the post-production stage has included going over footage, deciding how to format the bullet points and other on-screen information, providing still shots, and creating the two power points that are included. We've also watched everything in sequence more than once to make sure it all flows correctly and is clear and well-organized.

And so, it is nearly done. Our pre-sale period is underway; more information and sample footage can be found by clicking here. There are still a few days left to take advantage of our $100 off discount on pre-sales. We look forward to 2019 with gratitude for our many supporters--as always, we're humbled and amazed by the confidence and trust placed in us in regard to our work. A Happy New Year to all!
¶ 5:12 PM