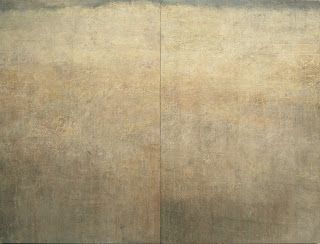 The last time I posted, my paintings for Beneath the Surface, my solo exhibit at the Pratt Museum in Homer, Alaska, were ready to be shipped off. Since then, they have arrived at the museum in good shape and a day early. This Tuesday, I'll follow them north. I will spend a few days in Homer to be on hand as the exhibit is installed, followed by the opening reception on Friday, 8/2 from 5-7pm (gallery talk at 5:15 pm.) I can't wait to see everything come together--including the display of artifacts from the museum's collection, and my nephew David Crowell's accompanying compositions to be played on a loop in the gallery.

A number of people have asked me about what it took to launch this exhibit--how far back was it planned? how did I deal with various logistical concerns? what were my thoughts as I developed the work? This is the first museum show I've undertaken, and I appreciate these questions, which acknowledge the complexity of a project like this one.

The exhibit has been two years in the planning--the initial exchange of emails with then-curator Holly Cusak-McVeigh go back to August of 2011. I had visited the Pratt Museum on a trip to Alaska with my family back in 1999 and hoped it would be an appropriate setting for my idea of a show with an archaeological theme. Once Holly expressed her enthusiasm and openness to the project, the first challenge for me was writing the exhibit proposal--a stack of paperwork that I shuffled around for several months before getting down to it. Because the Pratt Museum's mission is to present the "Art, Science and Culture of the Katchemak Bay" (the region where Homer is located)I needed to make my proposal specific enough to the area to fit with this mission but open-ended enough to encompass my own intuitive and abstract working process. I also needed to collaborate with David to include his compositions in the proposal. As he explains them now: The pieces in this collection are an auditory love letter to the uniquely beautiful town of Homer. Like an archaeologist meticulously digs through time, the music explores different layers of sound and texture beneath the surface, enhancing the visual element while also reminding us to listen (and look) for hidden detail. Our proposal was approved in May of 2012.

I began a few paintings for the show at about that time, but was not fully focused on it until my residency at AIR Serenbe in Georgia, in March of this year. Because I was in Ireland in October/November of 2012, and naturally painting in response to that experience, I was very grateful for the dedicated time at Serenbe to develop my ideas for Beneath the Surface. On the way to Georgia, I was able to meet with Holly, who had since taken a new position teaching in Indianapolis, and the intense brainstorming session we had was perfectly timed to launch my work time at Serenbe. I had also received a number of photos of artifacts and other information over the winter to use as references as I developed the work. I began most of the paintings for the show at Serenbe, and finished several pieces there, including the one above, Geo #2, 36"x48."

During the spring, I also exchanged numerous emails with the current curator of exhibitions at the Pratt Museum, Scott Bartlett, and our dialog about the show grew more specific. Once home again in April and May, I worked on the rest of the paintings, including some water-based mixed media pieces on paper.

In all, there are 19 paintings on panel of various sizes, and 12 small works on paper in the exhibit. When I got home from teaching in NC earlier this month, my most pressing job was to figure out how to get everything shipped in the safest and most economical way. My original idea was to use a big wood crate and ship by truck, but the freight companies I talked to would not ship original art. Numerous phone calls later, I determined that a shipment of several boxes by Fed Ex would be the best option, and approached a local packing/shipping business for a quote for packing. Their plan included at least 8 and maybe up to 11 separate boxes--which would put us way over the amount that the museum had allocated for shipping. This was distressing, but my husband saved the day by offering to take over the packing. In the end, he managed to consolidate everything into only four well-constructed boxes, and the shipping cost was well within budget. The photo below was taken in the process of nesting several smaller paintings inside a larger one. An inner box was constructed around each stack of paintings and then an outer box fitted with foam inserts. 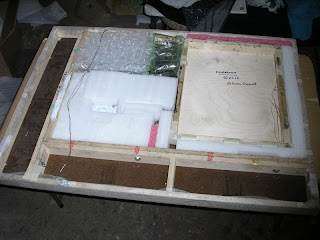 Of course there have been other tasks involved to this point, such as photographing everything, providing input on the design of the announcements (only minor tweaks were needed) and working out the complexities of travel to Alaska (my time there also includes teaching two workshops and another reception at blue.hollomon gallery in Anchorage.) The installation, the culmination of all this effort, lies just ahead.

I first wrote about my thoughts on the work itself in this post, while I was working at Serenbe. In the meantime, I've gained additional perspective as I have finished the work and written my statement. It strikes me that this experience is quite different from that of showing in commercial galleries, which I have done many times over the years. I've always thought of solo gallery exhibits as being a "slice of life," an opportunity to show what is happening in my work at that particular juncture. This show, though, has been very focused from the beginning on the theme of archaeology and as such has been a very different approach for me, and one I have found to be challenging and intriguing. Another difference is that, although all of the work in the show is for sale (and I would be delighted by any purchases) working within the museum context has freed me from concern about the marketability of the work.

I expect I'll be writing more about all of this after the exhibit is launched next week and the experiences around it continue to unfold. I'll post photos of the opening in my next post...
¶ 12:15 PM

Comments:
It is not often that a glimpse of the complexities of a show can be available. I foind that from concept of the idea for the show right through to the packing and final destination of the artwork fascinating. I only wish that I could be there to see it