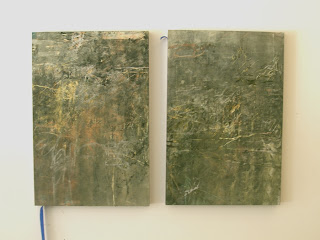 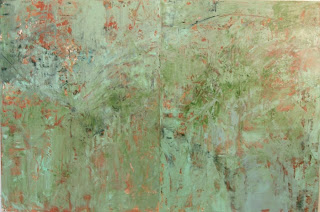 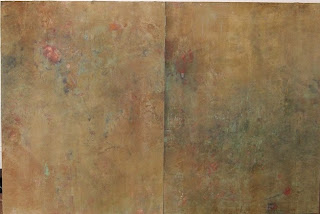 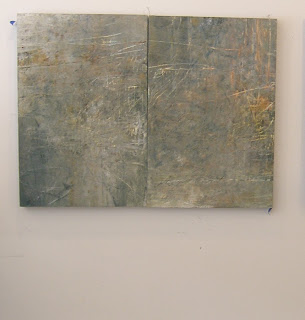 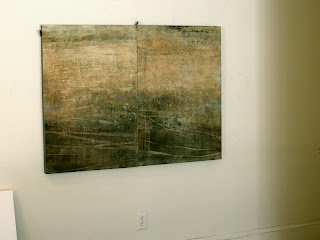 These photos were taken back in March, while I was artist in residence at the Serenbe community near Atlanta, Georgia. At Serenbe, I started (and in a few cases finished) many of the paintings I am currently exhibiting at the Pratt Museum in Homer, AK. Serenbe provided a wonderful time of focus to develop my ideas for my current exhibit, Beneath the Surface (which I have written about in several previous posts, including this (Click) one.)

Perhaps because I was free of many of the distractions of normal life at Serenbe, I managed to document this painting through its various stages of development. I've often thought of doing this and have made various starts in that direction, but I always seem to abandon the idea. However, during my residency time, I got into the habit of shooting a few photos on most days when I left the studio.

The photos above show the progression of the painting, Geo #2 at six points from beginning to almost finished. Below are two photos of the same painting in its finished state, installed at the Pratt Museum (the exhibit is on view through September 29.) I think I probably skipped a few stages during my documentation but the "in progress" photos do show the general idea. Once I got the painting home I added more powdered pigment and sand for texture, and worked it all over for additional depth. 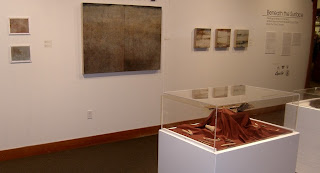 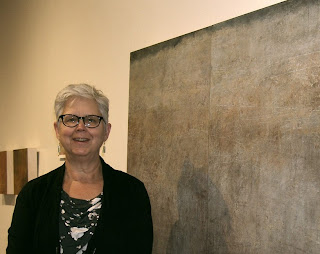 I am often asked about the underlying layers in my work and how the process unfolds, and perhaps these photos will provide some insight. I also know that there will be those who will gravitate to an earlier stage and wonder why I kept going! But after a certain point, my ideas for finishing the work were set on a very rock-like surface.

This idea is not where the painting began, though. Originally I thought of working with the photos of beads that I had received along with other artifact photos from the Pratt. But I'm always open to shifts in my original idea and I also know that an abandoned idea may come around again. For example, compare the third photo at the top of the page with the painting below, as it hangs in the Pratt exhibit: 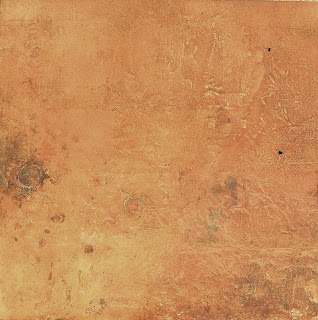 This is a much smaller painting (10"x10") done after my time at Serenbe, and it reflects the direction that Geo #2 was on for a time. Perhaps is more suited in scale to depicting the tiny beads.

It is a common response for artists in my classes to regret painting over or changing direction in their work, but I believe that our art brains take note of worthy ideas even if the current painting is not right for their development. Building a painting in layers, as I do, means that there are many paintings and painting ideas under the final surface, and some will re-emerge in subsequent paintings.

In my next post I'll include more photos and thoughts about the Pratt exhibit. It was a very satisfying experience for me and I am still processing what it has taught me, and where it might lead...in the meantime, click on the photo below for an online album of installation shots.